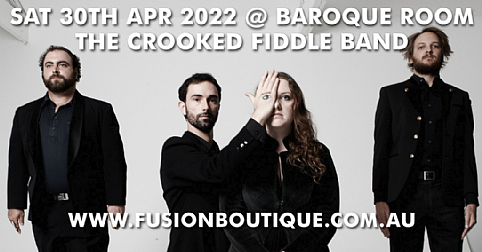 When:
Sat 30 Apr 2022
Cost:
$40 ($35 pre-sale)
Details:
ARIA nominees THE CROOKED FIDDLE BAND are a mesmerising and fiery acoustic 4-piece that deliver high-energy Chainsaw Future-Folk. Post-Apocalyptic World Music. Celtic Energy. Swamp-Stomping Hoe down. Dance-Inciting Mayhem. Hardcore Gypsy Passion!
The Crooked Fiddle Band formed in 2006 through their mutual love of the energy and intensity of various traditional world music. Whilst writing and arranging, they discovered that this energy was shared by the other music they love: there seems to be a common thread between the frenetic accompaniment of gypsy, klezmer and punk rock; between the twisting rhythms of math-metal and Balkan folk; between the clear tonalities of Scandinavian folk, Celtic folk, and cinematic post rock.
All these influences went into the mix, but what came out was The Crooked Fiddle Band. The sound they love is dark and often driving, but also writhing and ecstatic. They have jumped around with whirling crowds at festivals, bars and dirty warehouse parties throughout Europe and Australia and also played their more cinematic sounds in the Opera Theatre of the Sydney Opera House.
This music they have sometimes called ‘chainsaw folk’ – even though they are pro-conservation – but others have called it “14th century Romanian metal”, “thrash folk”, “whirlwind gypsy” and even “what Sepultura would sound like if they provided the soundtrack to a hyperactive version of O Brother Where Art Thou.” So whilst the search continues for a name for their genre, they are mainly concerned with making music with melody, energy and intensity.

Driven by the beautiful and furious fiddling of Jess Randall (also on Lennart Lovdin Nyckelharpa), and underpinned by a rhythm section featuring Gordon Wallace (Gilet guitar, a Wheeler Custom Lutherie guizouki and a Fylde mandolin and cittern), Mark Stevens (double bass, Appalachian dulcimer, charango) and Joe Gould (drum kit, hand percussion, garbage bin, vocals) the Crooked Fiddle Band sound blasts, rocks and grooves to the point of dementia, compelling listeners into a joyous frenzy.
Their latest offering ‘Another Subtle Atom Bomb’ takes the band’s blistering violin-led live show and creates soundtracks to their feelings around climate change. From angsty and furious folk tunes to fantastical imagined worlds full of ecstatic hope, this is The Crooked Fiddle Band’s most personal album yet.
Their music has been described by Brian Eno as “…completely surprising: the music is original and quixotic. I can’t say I’ve ever heard anything else like it!”

“When The Crooked Fiddle Band took to the stage, it was as though someone had put 10,000 volts through the dance floor.” – BEAT magazine

Share The Crooked Fiddle Band Live In Concert with friends.

Join Paranormal Pete to investigate the reports of Ghosts & Paranormal activity at the mine 22nd Janaury. 0418 416 403
more »

Relax & reconnect to natural wonder...
Also in this Section