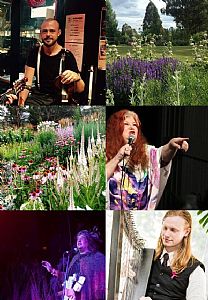 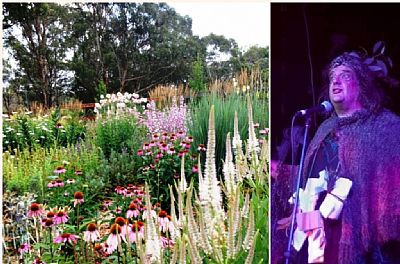 Click to enlarge
When:
Every day until Sun 22 Nov 2020
Time:
10:30am-12:00. 1:30pm-3pm
Cost:
$35.00
Booking:
A Must
Facilities:
Toilet on Site
Notes:
Event facilities may be modified in wet weather
Details:
Steven Vellas’ show garden Wild Meadows in Little Hartley and the Fierce Violets enter into a collaborative presentation of composition and performance to bring you some of the most delightful and colourful poetry and music to swoon over 4 performances between the 21st and the 22nd of November.

Stephen Vella, Horticulturist Garden Designer with a career path Spanning 29 years from Sydney and the Blue mountains Botanic gardens where he was actively involved with major landscape developments and horticultural discoveries. Stephen now owns and runs a business maintaining and developing beautiful gardens at Mount Wilson and the upper mountains. Stephen occasionally opens his private garden for visitors to be inspired, a place to learn and enjoy the facets of gardening.

Peter Urquhart is a performance artist, researcher and composer and is a Blackheath resident. Urquhart has studied and performed internationally as a composer, violinist and performer. Performing on violin, viola including many solo vocal pieces. Urquharts’ new focus has shifted towards collaborative methodologies and random procedures. Urquhart has a keen interest in these fields and is developing philosophical theories that touch on realms and paradigms and the influences these have on reflexivity and universal observations of synchronicity. Be swooned by Urquharts’ ethereal vibrations

Charles Freyberg is a Kings Cross poet who often writes about the enlivening eccentrics of the inner city. Freyberg regularly travels to the Blue Mountains and the North coast. He sees the energy and the complexity of a thriving cosmos under constant threat, always transforming. Freyberg’s book ‘Dining on the Edge’ is published by Ginninderra Press, his second book ‘The Crumbling Mansion’ is out shortly.

Taras is a Sydney based electric harpist and composer. He has performed across the country and has recorded two albums. In 2017 he achieved the world record for continuously playing the lyre. In 2018 he performed in the Sydney Opera house and released his album Beneath the Night Sky. Taras has taken a break from performing during covid and has focused on luthier work. He is looking forward to return to the stage in November.

Lou Steer is a cabaret diva who takes her poetry to the people- at festivals, markets, museums and even graveyards. Known for her passionate expression, Lou speaks of hearts and flowers, but the hearts are fractured and the flowers have thorns. Her performances are on UTube, her poems are widely published in zines and anthologies.

These are just some of the highlights of the fierce violets at Wild Meadows. Bring a picnic rug and an open heart at this unique Spring display located in one of the most inspired show gardens of the Blue Mountains region.

The Fierce Violets have a unique and colourful history of collaboration dating back over 10 years in the Sydney Metropolitan. Their diversity is relaxed and sublime and aims to serenade and inspire you to tranquillity, nature and wonder.

Need help with your Company accounts?

Speak with one of our friendly staff members today. We are here to help.
more »

Queen bed
Also in this Section