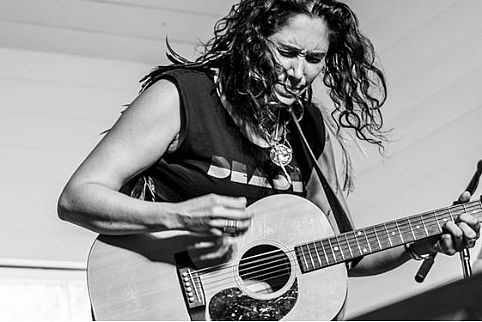 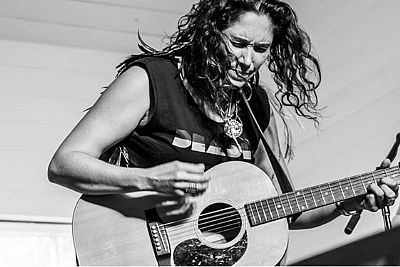 Story is at the forefront for troubadour Áine Tyrrell whose rich song-writing practice draws deeply on her Irish roots. Her latest offering 'Return to the Sea' was written and recorded in her homeland but mastered and crowd funded with one boot in the red dirt of her adopted country of Australia. Fiercely independent Tyrrell is not one to bend to the demands of conventional production arrangements, and so with the help of Creative Arts Victoria, her long time musical producer Mark Stanley, and her international fan base, 'Return To The Sea' went rogue, recording in lounge rooms, front bars, old churches, and remote islands.

Return To The Sea has just been released with first song "In This House" gaining international attention as a finalist in the 2018 International Song-writing Competition and being used across schools in South Australia to reteach the history of colonisation. In This House along with 9 other tracks make an album that is a treasure trove of contemporary narratives and musical sojourns with a solid respect for tradition and a passion for adventure and travelling to new lands, both real, and musical. 'Return to the Sea' is a passionate journey as it draws from a number of styles and influences. Certainly, the traditional Irish folk is in her blood, but so too are elements of soul and rock 'n' roll, entwined within her lyrical testaments. 'Return To The Sea' is a call to arms, a siren's wisdoms and warnings, and most importantly the soundtrack of a woman who walks her own beat.

Her unwavering passion for justice and integrity has led to her supporting current Women's Rights and Indigenous Rights issues through performances, social media campaigning, song writing and public speaking engagements.


+ Special Guests SMITH & JONES
Smith & Jones are a duo from Bathurst, made up of keyboard player and vocalist Abby Smith, with guitarist and vocalist Sophie Jones. They have never been ones to follow the pack. Though classified as alt-country, their goal has never been to remain within the confines of any genre, preferring to let their sound and their songs take them where they will.

*PLEASE NOTE THAT THE DOWNSTAIRS COCKTAIL BAR WILL BE OPEN FROM 4PM FOR PRE-SHOW DRINKS & EARLY FOOD ORDERS.

If entering from the front the cocktail bar/restaurant is on the right and access to the upstairs performance space in the lounge is up the stairs or via the lift towards the back of the hotel. Access can also be made through the rear and the lift to the lounge is in the atrium.
The Metropole is an all ages venue however minors must be accompanied by a parent or legal guardian and must remain supervised and do require a standard ticket for entry. Please also keep in mind that the performance space is a listening room.

Drinks and light meals will also be available from the Metro Retro pop up bar upstairs once doors open.

Invitation to Couples for April intake.

Working with couples to reconnect, repair and rebuild pathways back to intimacy and a shared experience.
more »

Jenolan Caves Road is temporarily closed at Duckmaloi Road junction. Our guests allowed through 1.25 klm to our gate.
more »