Wine And Roses at Art Of Lunch, Avalon 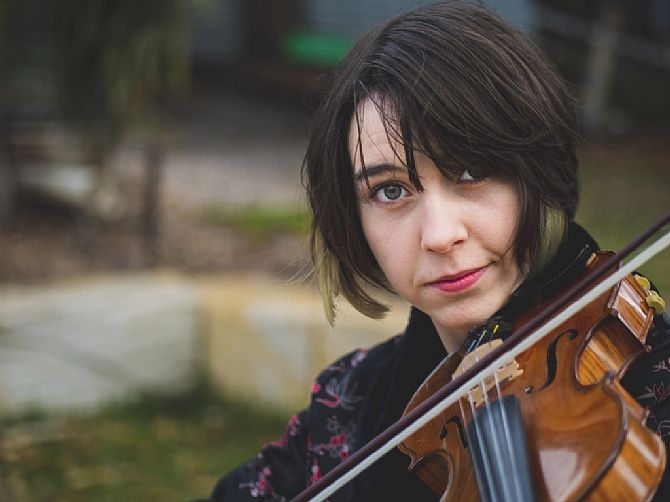 Maizy Coombes. Photo by Daniel Di Biase
Art of Lunch events celebrate exhibition, performance and creative cuisine. September's Art of Lunch theme for Sunday 29th at Avalon Restaurant is 'Wine and Roses' and features a glamorous exhibition by artist Gerlinde Thomas, "who Paints with the cameras eye" and you can meet her in person over a brief interview conversation with Art of Lunch MC, Meg Benson.

The exhibition is complemented by the emotive music by Maizy Coombes on violin & vocals. As usual there will be a special 3-course meal inspired by the theme, creatively designed by Dylan Brookes, David Cartwright and their culinary team who have taken up the challenge of creating new dishes for Art of Lunch in earnest resulting in much talk about their ingenuity and flair.

Gerlinde Thomas paints quintessential portraits of the bygone era of Jazz Age America and her exhibition will be displayed at the Avalon for a whole month until 24th October. Gerlinde's paintings capture the ultra-female qualities of glamour and style, joie de vivre and exuberance. She frames women in poses that invite intimacy, others whose characters are self-possessed, even defiant. Perhaps there are hints of the dangers of decadence in the darkened background hues. These are not clichéd or sentimental images, but recognise that this was a transformative period for women with the possibility of accelerated social mobility and the rise of consumer culture.

Gerlinde Thomas has always had a passion for creating, being drawn to portraiture and figurative endeavours. She began her career using watercolours, then later transitioning to oils. "it's as if she herself is composing a singular celluloid frame by hand, guided by the dappling fingers of the classic filmmakers of l'epoca d'oro, Hurell, Stroheim and Von Sternberg. Stirring faint memories we may or may not have had" Jimmi Vargas.  She has participated in over 45 art exhibitions, and has held 4 solo exhibitions incl "On The Face Of It" at Lost Bear Gallery featuring portraits of Blue Mountains artists. "Bygone Eras" at Gallery One88 in Katoomba depicted nostalgic evocations of the hedonistic Gatsby era and Hollywood golden days. Gerlinde is represented by the Little Wombat Gallery in Faulconbridge. Currently, Gerlinde is working on commissions.

Endearing violinist and singer/songwriter from the Blue Mountains,  Maizy Coombes is well known for her solo performances as well as for her role in bands such as Snail and Lime and Steel, a band she was invited to join at age 18 and with whom she has performed at multiple festivals across Australia. She has also made appearances with many Blue Mountains performers. Maizy creates emotive music on violin & vocals with her clever use of a looping pedal to create rich layers with light and shade in her music. Maizy was also a recent highlight at the 2018 Inaugural Blue Mountains Creative Leader Awards and as a result was immediately invited to perform at Encountering the Wild multi-arts festival at Gallery H Dargon.  Maizy's music encompasses the genres of Folk, Independent, Contemporary and Alternative. Her influences include Regina Spektor, Andrew Bird, and Ratatat. It's music with depth, but not at all heavy. In a somewhat whimsical way Maizy describes her unique soundscapes " it has the ability to bring out tears as you apply make-up or brush your teeth, yet still leave you feeling contemplative and joyous". She has just returned home from a trip to the NT after being invited to Freedom Day Festival by Ian Morrison of Katoomba Music, to play violin parts for Mudburra Elder and singer/songwriter Raymond Dimakarri Dixon and his Daughter Eleanor Nalyirri Dixon who sing in Mudburra language. You can ask Maizy about her recent experiences in person.