There is Hope for Koalas, and You Can Help 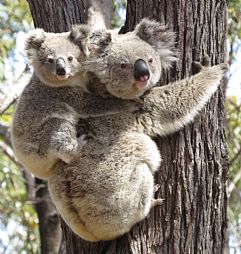 Koalas Freya and Xena: Photo by Jordan McKay
There’s been a lot of talk in the press lately about koalas, with a WWF report predicting extinction by 2050, and a more recent claim by the Australian Koala Foundation that koalas are already functionally extinct.

Koalas are in trouble, they are listed as a threatened species vulnerable to extinction and we need to act now to conserve them. However, the news is not all doom and gloom, especially in the Greater Blue Mountains region.

Science for Wildlife has been running the Blue Mountains Koala Project since 2014 and is mapping koalas and their habitats in the region, to identify threats and to help conserve them. Dr Kellie Leigh, Executive Director, says there is some good news because koala populations appear to be growing at several sites in and around the Blue Mountains. This is contrary to expectations that the protected areas were not likely to support large numbers of koalas due to a base of sandstone dominated soils.

However, it’s important that the community helps to protect our koalas as there are a growing number of koala records near developed areas. The first study site for the Blue Mountains Koala Project was in south east Wollemi National Park, where koalas are recorded in increasing numbers each year moving down into the Hawkesbury, particularly around Kurrajong and Grose Vale. Now the Koala Project is expanding to other sites, where the habitats available to koalas are very different.

“We’ve had a range of interesting koala sighting reports, and also good results from the koala scat surveys that we run,” says Dr Leigh. “For the first time in many decades koalas have been confirmed in locations on both the eastern and western sides of the Blue Mountains. In the west we’ve now got records in Little Hartley, in the Megalong along the Coxs River, and up at Govetts Leap in Blackheath, plus we are finding a lot of koalas in the northern section of Kanangra-Boyd National Park.

"To the east we’ve had quite a few sightings in the Lower Mountains around Winmalee and Springwood and we have also found koala scats at Hazelbrook. Last season koalas were also found around Mulgoa and Silverdale, we tagged a young male koala there that was radio-tracked by volunteers and he travelled over 30km south.”

Science for Wildlife has also made an important discovery about the local koalas. Through a collaborative research project with the University of Sydney, James Cook University and San
Diego Zoo Global, the team discovered that koalas in the Blue Mountains are the most genetically diverse out of 21 koala populations tested, ranging from South Australia to northern Queensland. That makes them important for conservation of the species.

Dr Leigh says, “As the Blue Mountains Koala Project expands activities across more sites to document local koala populations, we need people to help. If you see or hear a koala, please report the sighting to us. If you’re a keen bushwalker, you can also volunteer to help with surveys, including Koala Spotting or helping out on our Koala Scat Surveys. There are surveys running this month so visit the Science for Wildlife website to register.

"For property owners, in certain areas we are also requesting access to carry out koala scat surveys, and once we have more information on the most important tree species for koalas we’ll be providing information on habitat restoration to land holders.”

Report a Koala Sighting online OR if you have an Android phone you can report it via the Koala Spotter app, available for download in Google Play (an iphone version is in development).

Eco cabins with views you can only dream about