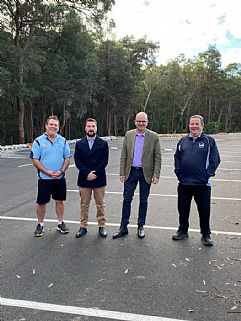 The new sealed car park, that provides almost 100 spaces, is phase one of the project. Three-bay cricket practice nets are also being constructed, along with a mini soccer field.

Construction of the new fit-for-purpose clubhouse and amenities buildings, an east and west pavilion, will get underway later this year at the site of the existing amenities block to the north-west of the main playing field.

Mayor Mark Greenhill said: “This project has come with challenges, including delays with environmental consent, the natural disaster and flooding that occurred in March, and the requirement of an upgrade to an electrical distribution substation (because the whole area is at capacity) which was a cost that was unplanned.

“Regardless, Council’s commitment to this project continues to be over $1 million. This, coupled with the $1.3 million in Federal funding and $750,000 in State government funding, means this project will be delivered as required.

“It is fantastic to see Phase 1 of the project now being completed and plans for the new clubhouse and amenities buildings being finalised.  This is an important project to deliver a major upgrade of facilities at this popular precinct.”

Ward 4 Councillor Brendan Christie said: “It’s great to see this part of the Knapsack Park upgrade completed. The old car park was a bumpy dirt patch and it’s so good to see the club have a new, safe car park for players and their families.

“Working with Dave (Smith), Len (Bowman) and the whole club over many years has been a great privilege and the club is lucky to have such great activists for their players. I’d like to thank the State and Federal governments for their contribution which helped Council fund this project that will serve our community into the future.”

More information, including the plans for the new clubhouse and amenities buildings are available on Council's website.

This project has been funded by the Federal Government’s Community Development Grant, the NSW Office of Sport and Council.