Keep Local Roads Safe: Slow Down in My Street 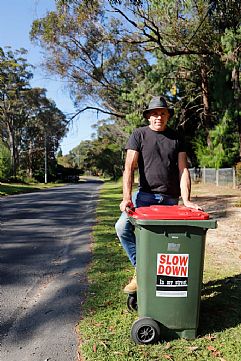 Blue Mountains resident Lou Pravdacich is displaying the Slow Down in My Street sticker on his bin
There is no such thing as safe speeding. Reducing your speed on local roads means you’re doing your bit to saves local lives.

Blue Mountains Mayor, Cr Mark Greenhill, said: “Slow Down in My Street is a local road safety initiative, being rolled out in May and June, which encourages motorists to slow down on local roads and drive to the conditions.

“Speeding remains the highest identifiable behavioural factor in crashes within our City. Transport for NSW data shows that there were 177 recorded crashes in the Blue Mountains in 2019 with speed being a factor in 40 or 23% of these crashes.

“There is no such thing as safe speeding. Speed alone regardless of how good a driver you may be increases both the likelihood and severity of a crash.”

Travelling at 5km over the speed limit in good weather conditions can put you, your passenger’s pedestrians and other vulnerable road users at increased risk. It’s simple, the faster you travel the longer it takes to stop. Add adverse weather conditions into the mix and the impact of a crash is more severe.

According to the NSW Centre for Road Safety, even small reductions in speed can make a difference. When driving at 50 km/h, it takes about 38 metres to stop, but at 60 km/h that distance increases significantly up to 58 metres. Even small differences in impact speed, makes a large difference to the probability of serious injury particularly on residential streets.

“Driving to conditions and slower speeds improves a driver’s ability to stop and avoid crashes, especially in residential areas. Where crashes do occur they are less severe, especially to vulnerable pedestrians and passengers such as children and the elderly,” Mayor Greenhill said.

The Blue Mountains Police Area Command supports Blue Mountains City Council in its Slow Down In My Street program. Police will be targeting speeding on local streets during the campaign.  Demerit points and fines will be issued to any motorist caught speeding.

Slow Down in My Street stickers will also be provided to residents. Council is asking residents to apply the sticker to their waste bin as an ongoing visual reminder for motorists to slow down in our local streets.

The campaign is jointly funded by TfNSW and BMCC, with enforcement support from local Police to make our local streets safer for everyone.

Residents interested in playing their part in encouraging slower speeds and safe driving behaviour can request a bin sticker for their Council waste bin by emailing: council@bmcc.nsw.gov.au. 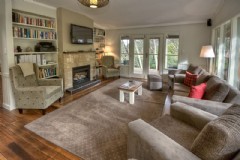 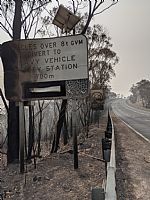 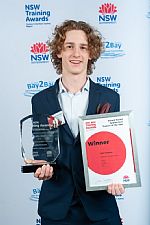 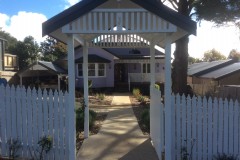