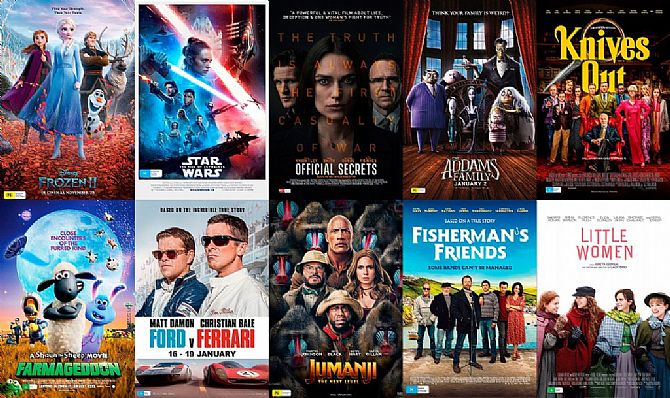 Anna, Elsa, Kristoff, Olaf and Sven leave Arendelle and travel to an ancient, autumn-bound forest to uncover the origins of Elsa's powers and save their kingdom. Starring Josh Gad, Idina Menzel, Jonathan Groff.

The surviving Resistance faces the First Order once more as Rey, Finn and Poe Dameron's journey continues. With the power and knowledge of generations behind them, the final battle commences.

Matthew Goode, Keira Knightley, MyAnna Buring. The true story of a British whistleblower who leaked information to the press about an illegal NSA spy operation designed to push the UN Security Council into sanctioning the 2003 invasion of Iraq.

When renowned crime novelist Harlan Thrombey (Christopher Plummer) is found dead at his estate just after his 85th birthday, the inquisitive and debonair Detective Benoit Blanc (Daniel Craig) is mysteriously enlisted to investigate. From Harlan's dysfunctional family to his devoted staff, Blanc sifts through a web of red herrings and self-serving lies to uncover the truth behind Harlan's untimely death.

Animated. A Shawn the Sheep movie. When an alien with amazing powers crash-lands near Mossy Bottom Farm, Shaun the Sheep goes on a mission to shepherd the intergalactic visitor home before a sinister organization can capture her.

Matt Damon, Christian Bale. American car designer Carroll Shelby and driver Ken Miles battle corporate interference, the laws of physics and their own personal demons to build a revolutionary race car for Ford and challenge Ferrari at the 24 Hours of Le Mans in 1966.

The four players brave the jungle, desert, mountains and dangerous animals to save the fantastical video game world of Jumanji.

Ten fisherman from Cornwall are signed by Universal Records and achieve a top ten hit with their debut album of Sea Shanties.

Following the lives of four sisters, Amy, Jo, Beth and Meg, as they come of age in America in the aftermath of the Civil War. Though all very different from each other, the March sisters stand by each other through difficult and changing times.

Boost for headspace Katoomba to support young Australians in the Blue Mountains
As part of a new, nation-wide $26 million investment across the headspace...
More News »