The Nutcracker & the Four Realms (PG)
13 to 26 Dec
Staring: Mackenzie Foy, Morgan Freeman,Jayden Fowora-Knight, Helen Mirren and Keira Knightley
All Clara (Mackenzie Foy) wants is a key – a one-of-a-kind key that will unlock a box that holds a priceless gift. A golden thread, presented to her at godfather Drosselmeyer’s (Morgan Freeman) annual holiday party, leads her to the coveted key—which promptly disappears into a strange and mysterious parallel world. It’s there that Clara encounters a soldier named Phillip (Jayden Fowora-Knight), a gang of mice and the regents who preside over three Realms: Land of Snowflakes, Land of Flowers and Land of Sweets. Clara and Phillip must brave the ominous Fourth Realm, home to the tyrant Mother Ginger (Helen Mirren), to retrieve Clara’s key and hopefully return harmony to the unstable world. Starring Keira Knightley as the Sugar Plum Fairy.

Ralph Breaks the Internet (PG)
26 Dec to 16 Jan
Disney animation. Voice of John C. Reilly, Sarah Silverman, Gal Gadot
We leave Litwak’s video arcade behind, venturing into the uncharted, expansive and thrilling world of the internet—which may or may not survive Ralph’s wrecking. Video game bad guy Ralph (voice of John C. Reilly) and fellow misfit Vanellope von Schweetz (voice of Sarah Silverman) must risk it all by travelling to the world wide web in search of a replacement part to save Vanellope’s video game, Sugar Rush.

Bohemian Rhapsody (M)
27 Dec to 31 Dec
Staring: Rami Malek, Lucy Boynton, Gwilym Lee, Ben Hardy
A foot-stomping celebration of Queen, their music and their extraordinary lead singer Freddie Mercury. Freddie defied stereotypes and shattered convention to become one of the most beloved entertainers on the planet. The film traces the meteoric rise of the band through their iconic songs and revolutionary sound. They reach unparalleled success, but in an unexpected turn Freddie, surrounded by darker influences, shuns Queen in pursuit of his solo career. Having suffered greatly without the collaboration of Queen, Freddie manages to reunite with his bandmates just in time for Live Aid.

Mary Poppins Returns (G)
1 to 30 Jan
Staring: Emily Blunt, Lin-Manuel Miranda, Julie Walters, Colin Firth, Meryl Streep, Dick Van Dyke and Angela Lansbury
In Depression-era London, a now-grown Jane and Michael Banks, along with Michael's three children, are visited by the enigmatic Mary Poppins following a personal loss. Through her unique magical skills, and with the aid of her friend Jack, she helps the family rediscover the joy and wonder missing in their lives.

Storm Boy (PG)
17 Jan to 13 Feb
Staring: Jai Courtney, Geoffrey Rush, David Gulpilil, Erik Thomson , Finn Little, Trevor Jamieson
A beautiful and contemporary retelling of Colin Thiele's classic Australian tale. 'Storm Boy' has grown up to be Michael Kingley, a successful retired businessman and grandfather. When Kingley starts to see images from his past that he can't explain, he is forced to remember his long-forgotten childhood, growing up on an isolated coastline with his father. He recounts to his grand-daughter the story of how, as a boy, he rescued and raised an extraordinary orphaned pelican, Mr Percival. Their remarkable adventures and very special bond has a profound effect on all their lives. Based on the beloved book, Storm Boy is a timeless story of an unusual and unconditional friendship. 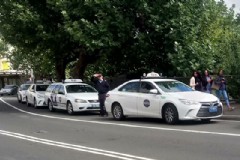