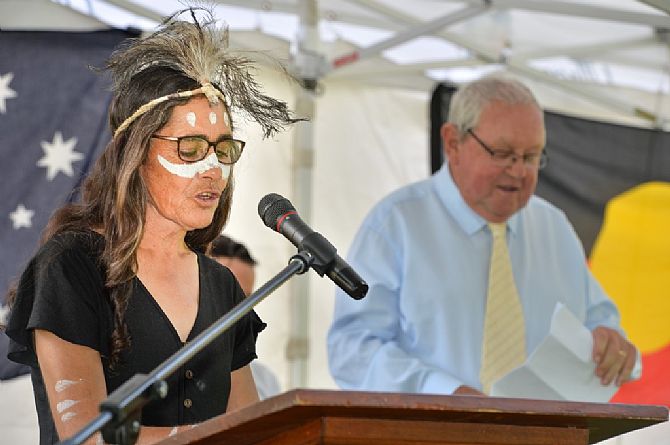 “Welcoming new Australian citizens and recognising the contributions made by community members is an integral part of Australia Day,” Mayor Ray Thompson said. “It enables us to focus on the values we uphold within our community – kindness, inclusion and respect for all.”

Mayor Thompson stated that, “the individuals honored during the official ceremony embody these values, and I congratulate everyone that received a nomination.”

The Young Volunteer of the Year Award recognises young people between the ages of 16 and 26 that have generously committed their time to benefit the community. The award was given to Alisha Cook for her commitment and contribution to supporting and representing young people in the region through her involvement in the Lithgow Youth Council and as a committee member for Headspace. Alisha gives her time to raise awareness of mental health issues in our community and has been instrumental in organising and running events to reach young people.

The Volunteer of the Year Award, which recognises the generosity and dedication of individuals who commit their time and expertise to worthy causes within the community, was awarded to Kas Hilton. Kas was instrumental in establishing a Dementia Alliance for the Lithgow community. This is an essential support service for those living with dementia. As well as advocating for support services, Kas organises events and fundraises to improve the lives of those in our community affected by dementia. Kas has worked tirelessly to provide our community with a safe place to meet, to gain information and establish supportive networks.

The Citizen Achievement Award recognises the achievements of local individuals who make a difference to our community by excelling Thomas Ebersoll received the award this year for his contribution to the enhancement and protection of the Wolgan Valley area. Thomas has maintained parts of the original track to the Glow Worm Tunnel, promoted the beauty of the region through ecotourism, and been a caretaker of local history through his care of the historic Newnes Hotel. As well as his successful business endeavors, Thomas has also contributed to many community groups as volunteer.

The Service to the Community Award recognizes groups and organisations that aim to enrich the lives of the people in the Lithgow area. The award was accepted by Captain Nick Alexander on behalf of the RFS Clarence Dargan Brigade. The nomination was made by a resident of Dargan who witnessed the tireless and endless dedication of his local brigade. He watched as exhausted members of this brigade faced the fires day after day, making personal sacrifices and putting themselves at risk to protect their community. Some members even lost their own homes whilst fighting to protect the homes and lives of others. The nominator was humbled by the selflessness and courage he witnessed.

The Outstanding Event of the Year Award was presented to Sharron Bowman for Live and Local After the Fires. The award recognises the significant contribution that special events make to our region. Whilst the number of events were reduced this year, those that did take place were important. Live ‘n’ Local After the Fires was one of those events. Its aim was to support local musicians and venues, provide local employment and provide relief to our community following a very exhausting fire season and the uncertainties arisen from COVID-19.

The Mayor also presented Special Recognition Awards to RFS Members Owen Sharwood, Adam Sharwood and David Peters, for their exceptional contribution during the Gospers Mountain Fire. During the presentation, Mayor Ray Thompson recounted the heroic efforts undertaken by the Awardees. “As was detailed to me by the NSW RFS District Manager Inspector Mick Holland, all were involved in the planning, preparation and daily fire control from the time the fire was in the Wollemi, through to leading and commanding crews in the tick of fighting the fire itself. Owen and Adam also, after three attempts, successfully completed one of the most technically difficult backburns in the Wolgan Valley that Mick Holland has seen.” 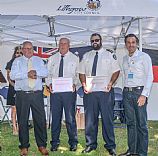