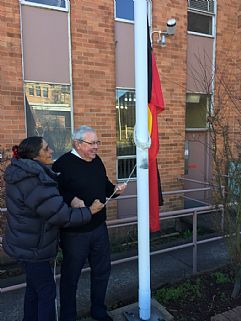 A flag raising ceremony has been held at Lithgow County Council to mark NAIDOC Week 2019.

The Mayor of Lithgow Councillor Ray Thompson and representatives of Mingaan Aboriginal Corporation raised the Aboriginal flag outside the Lithgow City Council chambers on Tuesday 9 July to mark the nation-wide celebration of NAIDOC Week.

NAIDOC Week celebrates the history, culture and achievements of Aboriginal and Torres Strait Islander peoples and this year is being celebrated across the country from 7th to 14th July with the theme of:  Voice. Treaty. Truth. Let's work together for a shared future.

“I am proud to stand here with members of the Lithgow Aboriginal community in this very important week of NAIDOC celebrations to raise the Aboriginal flag outside the Council chambers,” said the Mayor. “ As each year comes around, there is a growing recognition of the importance of recognizing and valuing the achievements and contributions of Aboriginal people in this community and in Australia as a whole.”

“ I ask the community to join with Council and the Aboriginal community in celebrating NAIDOC week 2019.