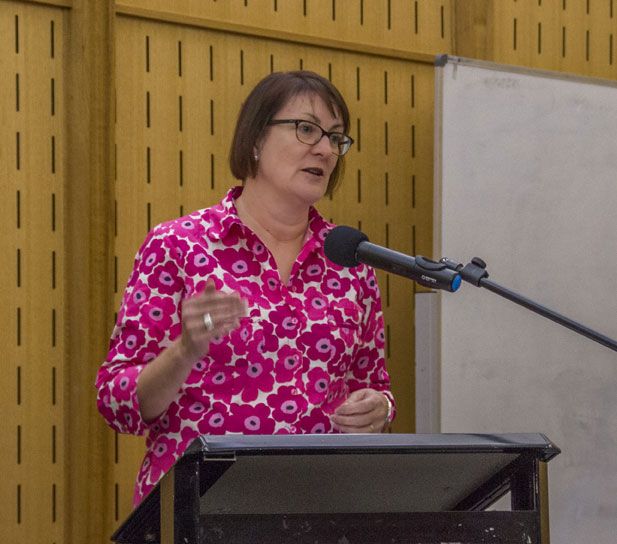 Susan Templeman speaking at the Launch of the Jobs for the West report
Member for Macquarie, Susan Templeman MP has welcomed a new report released by the ‘Jobs for Western Sydney’ Group at their official launch on Saturday.

At the launch, and in a speech she delivered earlier that week in Parliament, Ms Templeman congratulated the group and report author, Dr Ian Watson.

“I congratulate the group on the serious work they've done to work through the numbers and what they're trying to do to get behind the spin, to get to the bottom and to paint a realistic picture, because that's what people deserve.

“Contrary to the claims of a jobs bonanza, only 120 construction jobs and 800 airport jobs would be targeted to Western Sydney workers in the first stages of the project.

“That is a lot lower than the expectations people in the community have about how readily they're going to be able to get work, and it's been confirmed to me that anyone who takes a job on the airport project and relocates to the region for the duration of that work will be considered a local.

“So there isn't even any guarantee that the local jobs will go to an existing local employment pool.

“Dr Watson's report finds the overall job claims, such as 8,700 aviation jobs by 2031, are vastly exaggerated, and his analysis is that the proposals for the adjacent business park and for the aerotropolis appear unrealistic.

“Nothing I've seen or been told changes my view that there are profound negative impacts from the flight paths across the Blue Mountains and the Hawkesbury.

“As a community, I believe, we will have to fight hard to protect the peace and silence that we have until now been able to take for granted as something that we have when we choose to live in a World Heritage area,” she said.

A link to Ms Templeman’s full speech given in Parliament on 13 August 2018 can be found on her website.