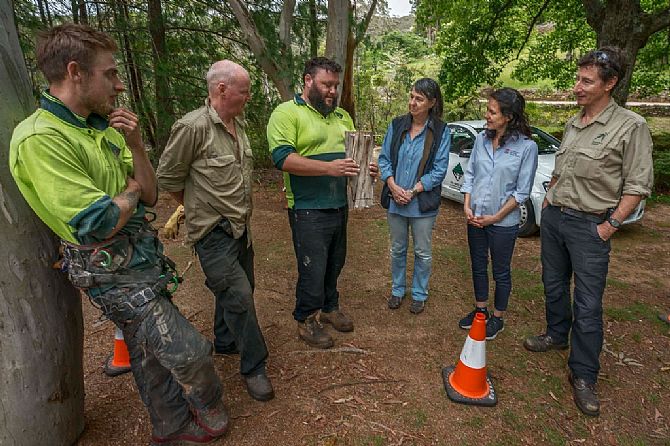 Financed by a grant from Greater Sydney Local Land Services through NSW Government funding, the habitat tree is located in The Glades at the edge of the Leura property, famous for its magnificent 1930s art deco house and set amid spectacular gardens and formal terraces overlooking sweeping views of the Jamison Valley.

Arborists using a chainsaw fast-tracked the natural process in the bush when tree hollows are formed by limbs dropping from trees, creating a hole in the tree trunk or limb.

Land clearing and urbanisation has led to a shortage of hollows across the Greater Sydney area, meaning there are fewer havens for small animals to shelter, hide from predators, breed and raise their young.

Of the 174 native animal species in NSW which rely on tree hollows, 40 are listed as threatened.

Everglades manager Guy McIlrath said: "Because tree hollows are becoming increasingly rare and their formation slow, it is very important to retain habitat trees, so when this big gum tree died it was an opportunity to provide a safe haven for some of the small animals who live at Everglades."

The Blue Mountains ash (Eucalyptus oreades) was pruned so it was safe for the many visitors to wander the tiered gardens and picnic under the tree canopy in the cool glade.

Experts from Sydney Arbour Trees, who have carved similar habitat hollows in dead trees across the Cumberland Plain area of Western Sydney, then created three artificial nest hollows for birds in the upper limbs and trunk and two openings for bats in the lower portion.

The arborists first sliced off a 'faceplate" before using new chainsaw techniques to carve habitat chambers into the tree branches and trunk and reattaching the faceplate to protect the resident animals which enter the readymade homes through custom-designed slits and holes.

Birds can still perch on the remaining branches while hollow-dependent animals such as Crimson Rosellas, Southern Boobook owls, Owlet-nightjars, Eastern Rosellas and Chocolate Wattled bats can move in to the new hollows.

While the creatures may be too tiny, timid or nocturnal for visitors to Everglades to see, an interpretive sign at the base of the tree explains the purpose of the habitat tree.

"What we’re doing here at Everglades to help provide shelter and food sources for native animals is an example of what everyone in the Blue Mountains can easily do to help conserve wildlife," Mr McIlrath said.

National Trust, which owns the Everglades property, and BMCC Bushcare volunteers have worked for years to ensure exotic plant species do not escape into bushland.

However, that is not always easy to do along cliff edges so, as part of the grant, specialist teams used rope access techniques to scale the cliffs around Everglades and remove weeds, thus preventing the spread into the Greater Blue Mountains World Heritage Area.

Everglades Historic House & Gardens, 37 Everglades Ave, Leura, is open from 10am to 5pm daily during daylight savings and from 10am to 4pm during autumn and winter. Entry: $13 adults, $8 concessions, $4 children, National Trust members free. Contact: (02) 4784 1938 or email everglades@nationaltrust.com.au.

This project is supported by Greater Sydney Local Land Services through funding from the NSW Government. For further information phone 4724 2100