The Orient Cave
All of Jenolan's caves are spectacular. Some are huge, some feature water or unusual history, some take you very close to the crystal, some are full of variety. But The Orient Cave is undeniably Jenolan's most beautiful.

Jenolan was a protected reserve 38 years before the Orient Cave was discovered. So, its jaw-dropping natural beauty has been completely preserved.

Back in 1904, when the Orient Cave was discovered, when people spoke of the 'Orient' they meant the region that we now think of as the Indian subcontinent and the Middle East. The early cave explorers were so overwhelmed by the cave's beauty that with their limited knowledge of the world, they named this cave and its chambers after the most richly exotic and legendary places they could think of - Persia, Egypt and India, the gems of 'the Orient'.

The Orient is regarded as one of Jenolan's less strenuous caves, with only 358 stair steps. So your tour guide can take you into this cave at an easy pace.

You start at the 'Binoomea Cut', a man-made shortcut into the cave. Following this tunnel, you enter the Orient via a small but beautiful chamber known as 'Bat End'.

Next, you head upwards to the dramatic 'Persian Chamber'. Many consider this the most beautiful chamber at Jenolan. The walls and roof are completely festooned in long calcite crystal formations - stalagmites, stalactites, columns, shawls and straws - in breathtaking array. The height of the chamber is just over 30 metres. The tallest stalagmite at Jenolan is in this chamber.  You descend into 'The Well', to view the 'Persian Chamber' from a different perspective.

Then, you move into the 'Egyptian Chamber', home to the second largest shawl at Jenolan. As you descend from the Egyptian Chamber, you pass a small, but exquisite chamber known as 'The Jungle'.

Finally, you come to 'The Indian Chamber', which you view from two levels. From the top level you get a perfect view of one of our most famous formations, 'The Indian Canopy'. At the bottom of the chamber you view 'The Crystal Basin', a large, beautiful formation which sometimes fills with pure water.

Tip: If you intend to view more than one cave at Jenolan, make sure you leave the Orient for last. 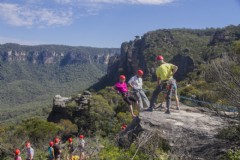 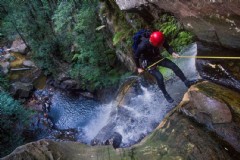 Glenbrook Cinema Online bookings available - all seats $12
Announcement
Does your Super cover insurance?Has your Super got you covered for insurance? With COVID-19, maybe not ... read onView Trumans Chartered Accountants »