The Birds are Back, Thanks to Dedicated Locals and Bushcare 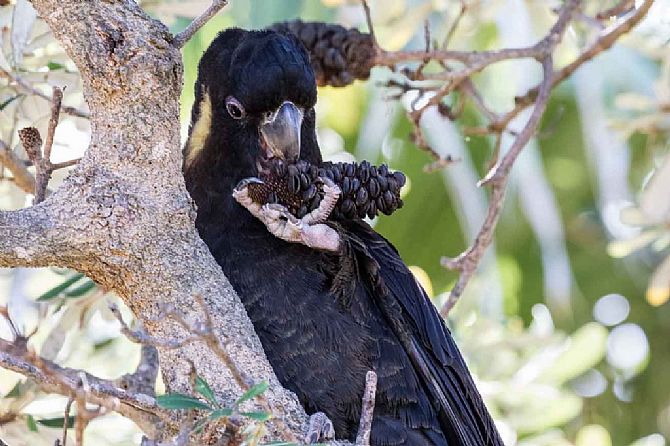 Yellow-tailed black cockatoos are making a welcome comeback to Banksia Park.
Birds have had a tough time lately due to drought and bush fires, but there’s one place they are starting to flourish – Banksia Park in Katoomba – thanks to two dedicated locals and a community-wide effort to restore their habitat.

In 2010, Katoomba residents Kerry Nettle and Adam Nelson, together with a small team of neighbours, took on the formidable challenge of restoring an overgrown site behind Katoomba High School on the edge of the World Heritage National Park.

“We knew there were large tree ferns hidden somewhere within the weeds because we could see them on Google Earth!” laughed Kerry.

“When we started it seemed an impossible task – the area was choked with willow, privet, bamboo, holly, Japanese honeysuckle, cherry laurel and blackberry to name a few. The creek was completely overgrown,” said Monica Nugent, Council’s Bushcare Officer.

“To begin with we just wanted to open up the creek and protect the headwaters of Banksia Streamlet, which flows into the National Park. The creek is also in the catchment of Warragamba Dam, Sydney’s drinking water supply. We knew there was swamp hidden in there too, but we didn’t know much about it. Swamps were a bit of a mystery,” said Adam.

As Kerry and Adam found out, swamps are a vital part of the Blue Mountains landscape. They maintain water flows in creeks and waterfalls, by storing water and slowly releasing it over time – like a giant sponge. Without swamps, many of our waterfalls would dry up during drought. Swamps also act as giant water filters, purifying water as it releases into creeks.

By giving life to the swamp, the project is also protecting vital habitat for endangered and threatened species like the Dwarf Mountain Pine, Blue Mountains Water Skink, Giant Burrowing Frog and Giant Dragonfly. The swamp will also provide crucial refuge for birds and animals during the next drought or fire season.

“When we removed the large willows and bamboo, there was some initial resistance from neighbours as there was such a dramatic change, but we have since replanted 60-70 native bird habitat species such as acacias, bottlebrush, blackwoods and hakeas,” said Kerry.

When the weed mass was finally removed, Kerry and Adam got to see the beautiful stand of tree ferns they’d only ever seen online. Now that their habitat is returning, the birds have moved back in.

“We are seeing so many birds now! Lyrebirds, glossy black and yellow-tailed black cockatoos, rosellas, thornbills, honeyeaters, wonga pigeons and olive-backed orioles. The black cockies love the acacias – you can hear their babies squawking for grubs,” said Kerry.

Along with providing ongoing bushcare support, Council is constructing a rock-lined channel and biofilter on the site to slow down and filter urban stormwater runoff – a major cause of poor stream health.  The system will remove up to 95% of bacteria and nutrients and improve overall water quality. Assistance for the project has also come from NSW National Parks and Wildlife Service, Katoomba High School and the Australian Buddhist Vihara.

Banksia Park Bushcare meets monthly on a Saturday. Get more information on Bushcare and how to join at Council's bushcare page.

Find out more about local waterways health by downloading a copy of the Blue Mountains Waterways Health Snapshot 2020 or visit Council’s web page on waterquality.

Council Bushcare Officer Monica Nugent with local residents Adam Nelson and Kerry Nettle at the Banksia Park Bushcare site, with the new biofilter in the background

The overgrown site, before work began