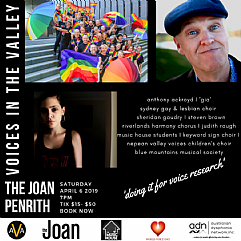 The extraordinary, energetic, and talented Sydney Gay and Lesbian Choir will be heading to Penrith for this year’s Voices in the Valley Show at The Joan on Saturday April 6th.

Since Voices in the Valley began @ The Joan in 2014, it has grown to become a much-anticipated annual showcase of vocal talent in honour of World Voice Day, celebrated globally on April 16th.

This year’s show will be hosted by Australia’s funny man Anthony Ackroyd whose laid back style ensures a night of surprises and totally relaxed entertainment. The Sydney Gay & Lesbian Choir will open the show with the unique energy that has seen them in high demand, performing to audiences around the world. Other highlights include the beautiful home-grown star ‘Gia’ (formerly known as Yianna Nicholas) whose independent music career has taken her from strength to strength, yet she remains true to her local roots and her passion for supporting others.

World Voice Day was founded in Brazil in 1999 with the aim of drawing attention to the science and phenomenon of voice production. It soon grew to highlight the beauty of voice, and the significant role that it plays in every aspect of our daily lives. The day of celebration has gained momentum across the globe, and currently over 50 countries join the annual event in some way.

If that’s not enough to sing about, all performers are committed to using the stage to raise awareness of, and funds for, people living with chronic and life changing voice disorders. Proceeds from the show on Saturday 6th April will support the work of the Australian Dysphonia Network.

Dysphonia (difficulty making voice sounds) can be debilitating and isolating. It can impact on individuals, the workforce and the broader community. It can ruin careers, relationships and lead to depression, yet it is often poorly diagnosed and frequently misunderstood… and most of us don’t give our voice a thought until it’s gone. The Australian Dysphonia Network aims to change that by raising awareness, and funds for research into early diagnosis and management of voice issues; they want voice disorders to be recognised and valued alongside vision and hearing issues.

This vocal spectacular is being co-hosted by The Joan and The Australian Dysphonia Network, with support from The Australian Voice Association & The Music House.

***Remember - Voice disorders can be difficult to diagnose, but ANY voice change that lasts longer that 4 weeks in the absence of a ‘cold’, should be fully assessed by a Laryngologist or Speech Pathologist whose expertise is in Voice issues.

April is voice awareness month, so go on ... start the conversation.

Voices in the Valley

Tickets:
Contact The Joan Box Office on 4723 7600 or by email: boxoffice@penrith.city. Tickets can also be purchased online at the link below. 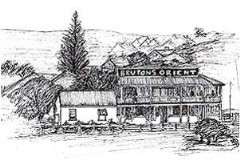