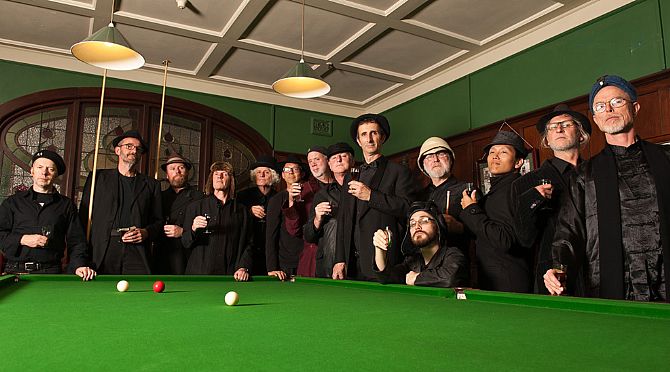 The Spooky Men’s Chorale is a vast, rumbling, steam-powered and black clad behemoth, based on the twin pillars of grand foolishness and the quest for the perfect subwoofer-rattling boofchord.

They return to the scene of their previous comic crimes with a program featuring works from their newest album Welcome to the Second Half - as well as some favourites from their 20-year history of musical mayhem. Even tastier in prospect, it’s the first in a new, delicious variation on the popular Prelude in Tea series at the spectacular Independent Theatre in North Sydney: “Sundays, Supper & Song” - concerts followed by a wine and cheese supper and a chat with the artists.

And among their number are conductor and founder Stephen Taberner of the Blue Mountains, David Warren of Ryde and Marrickville singer Mark D'astoli.

Men, singing songs. Some of them are funny. The Spooky Men seek to commentate on the absurdity and grandeur of the modern male armed only with their voices, a sly collection of hats and facial hair, and a twinkle in the eye.

The audience is invited to first joyously experience a wall of mansound, then laugh stupidly, then venture into areas of great tenderness. Not so much comedic as hilarious, not so much shimmeringly perfect as pleasingly and deeply human, the Spooky Men were formed in the Blue Mountains in 2001 by Christchurch-born ‘spookmeister’ Stephen Taberner.

They rose to prominence at the 2004 National Folk Festival in Canberra with a judicious combination of Georgian table songs, pindrop beautiful ballads, highly inappropriate covers and immaculate original man-anthems like ‘Don’t stand between a man and his tool.'

Their 750+ gigs since have included WOMAD, The Great Escape Festival, the Woodford, Cobargo, Port Fairy, Blue Mountains and Bellingen festivals. They’ve appeared on Spicks and Specks, The Mix and The New Inventors, performed live on ABC radio many times and have earned great international
acclaim on six UK tours and at major festivals including Edinburgh Fringe, Cambridge and Tonder (Denmark) and WOMAD New Zealand.

The best of Sundays, Supper and Song. Featuring voice and vocalists, the new Prelude Supper and Song Series concerts are followed by a wine and cheese supper and a chance for a chat with the artists. Featuring Spooky Men's Chorale, The Idea of North, Bel a Cappella, Soulfood, Song Company and more.