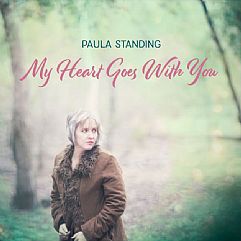 Following on from the whimsical first single from her forthcoming new album, songwriter Paula Standing has penned a rousing ode to her children that will tug the heartstrings of every parent. My Heart Goes With You, the second single from her full-length album, The More I Give, slated for release in September, is ultimately a love song, written about the affection for her two sons.

With both her children now in their 30s, Paula says there is always an unconditional bond. “They mean a lot to me and it is important to stay in touch,” she says. “They were so close growing up and are still a support to each other. It’s a touching scene to see when they catch-up after an extended absence. Despite one of them living on the other side of the planet, it doesn’t mean they ever leave my thoughts. Time and distance does not change commitment or that special place in my heart.”

The song has even more impact now. Just before COVID-19 derailed everything, Paula was about to head over to visit her youngest son in Canada, plans that are now indefinitely on hold. “It was more than heartbreaking to have to cancel the trip,” she says. “But I am relieved that he is safe, and still has a job. My eldest son was living in the Blue Mountains when there were fires raging there a few years ago, and the feeling is the same – regardless of the distance.”

It isn’t surprising that her sons are big fans of the song. “I introduced the song to my sons when it was first written, and they were very chuffed,” says Paula. “Both my sons have been musical from a young age, they have both penned their own songs, which makes me envious, as I was older than they are now when I first started writing. We all support each other’s work and love to show off a new song to each other. We have even fronted up to open mics together on a number of occasions. My youngest son played lead guitar for me at my first CD launch.”

Paula co-wrote the track in the studio with Gina Jeffreys, Lou Bradley and Niamh Watson, assisted by Rod McCormack. She envisioned it as a dreamy track, and worked to build the song over the session with the inclusion of the dobro, and the banjo behind the guitar instrumental anchoring it into an Americana feel. When it came to writing the lyrics, Paula dug deep back into her family history. “I gave a brief history of how I dragged my sons across the country twice while they were growing up,” she says. “As a result, I have always felt the need to always be there for them. Wherever they are, they know they can always call on me. Halley’s Comet flew over on the birth of my second son – I saw that as a sign that my family was complete.”

Throughout her musical journey, Paula has been revered for her honest approach to songwriting. Her songs tell a story and she is unafraid of sharing her own personal experiences. Penning a track about her children is one of the most private songs she has shared, but rather than this being daunting, it is something she is looking forward to sharing with audiences. “When you realise the more personal you are, the more universal the theme is,” she says. Everyone will find their own story in these songs. I have never been more proud to share my personal stories with these well-crafted songs from awesome co-writers and musicians. I hope fans will make them their own.”

Paula Standing’s single My Heart Goes With You is released to radio on Friday 24th July 2020. Her forthcoming album The More I Give is slated for release in September 2020. 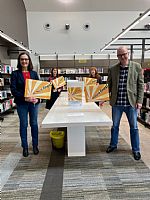