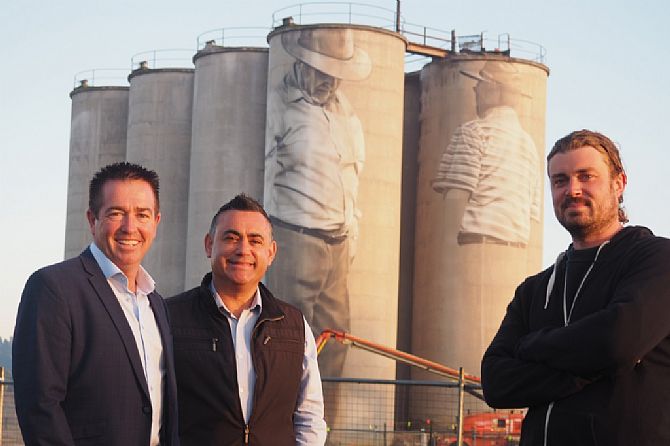 Paul Toole, John Barilaro and Guido Van Helten
Portland’s old cement works, now known as The Foundations, has had a visit from Deputy Premier and Minister for Regional NSW John Barilaro, and Member for Bathurst Paul Toole, who stopped by to view the iconic artworks transforming the silos.

The silos are being painted by world renowned artist, Guido Van Helten, as part of a project that will turn The Foundations into a major visitor attraction in the Central West.

The painting of the silos is the first step for the planned reactivation for The Foundations, which will see the former industrial site transformed over coming months and years.

Further plans for the site include a world-class heritage precinct with museums, a gallery and retail experiences, creating a destination for visitors from all over the state, country as well as international visitors.

After researching the town and its citizens earlier in the year, Mr Van Helten chose the people he would paint on the side of the towering silos.

Mr Van Helten has chosen members of the community that had a connection to the former cement works and were still residing in town.

His subjects are being kept closely guarded secrets, until the artworks are revealed on the silos.

Owner of The Foundations, Martin O’Connell said Portland is quickly becoming known as an arts town, with its well-regarded annual art exhibition and the ‘Signs of Yesteryear’ which already adorn walls around the town.

“The murals around town were one of the things that inspired us to commission this project, and we look forward to being able to add value to an already considerable legacy in the town,” Mr O’Connell said.

“The cement works site has an important place in the state’s history as it was the main producer of cement in Sydney’s building boom.”

“Cement from the site is responsible for many of Sydney’s iconic buildings and structures, and we look forward to being able to reveal and celebrate that further with other projects we have planned,” he said.

Deputy Premier and Minister for Regional NSW John Barilaro, who visited the site as part of a two-day visit to the Central West last week, said the project will drive tourism and help to revive the local economy in and around Portland NSW.

“It’s definitely a sight you won’t want to miss, and I encourage everyone travelling through or nearby to stop by and take a look.”

“This project will put Portland back on the map as a must-see regional town, and will only enhance the Central West’s reputation as a buzzing creative and cultural destination,” he said.

The silo painting project has also been a drawcard for many locals who have waited years to see some activity at the site. A weekly pop-up market and site tours during the months of April and May this year have seen over 600 people visit the site each weekend.

Member for Bathurst Paul Toole said he was thrilled to see such an iconic project revitalise the town of Portland.

“There has already been so much interest and buzz around this art project and I cannot wait to see the finished product,” Mr Toole said.

Over the coming months, new projects will be launched in the development that will celebrate the unique industrial heritage of Portland and the real story of the small regional town that built Sydney. 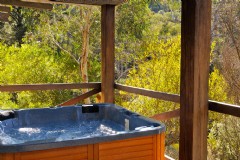 Unique Place of Beauty and Serenity