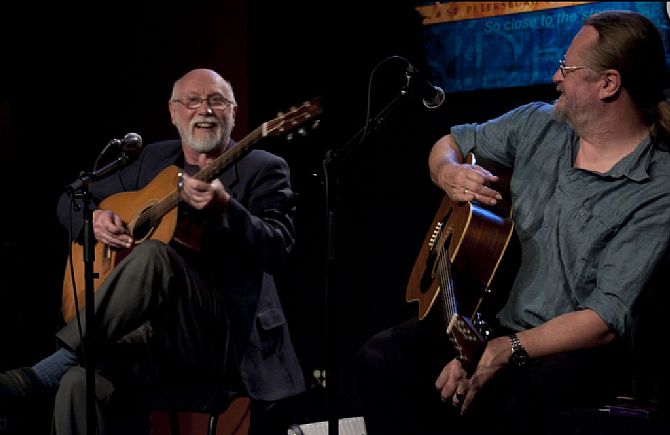 Alan Reid was a vital member of Battlefield Band from its inception in 1969 till his departure in 2010. In that time he toured all over the world and made almost 30 recordings with the band, working with such artists as Garrison Keillor, Van Morrison and Mike Oldfield. They won awards in Germany, Britain and the U.S. and throughout Alan was at the heart of the band, his keyboards underpinning the bagpipes and the fiddle. In being the first to use keyboards as an integral part of a traditional folk band Alan’s contribution to the band’s story has ensured its stature in Scottish culture as well as its influence on many of today’s Celtic musicians.

Alan’s singing has long been respected by his peers and his song writing has grown in stature ever since the 1980s when his songs first appeared in the band repertoire, lyrical songs steeped in history, strong in storytelling and rich in melody.

Dutch born Rob van Sante is a guitarist of skill and subtlety and a highly respected singer with a wealth of experience playing with a variety of prominent English folk and Celtic musicians.

His mother was a child prodigy on piano so it is no surprise that music has played an important part in his life.

Rob has appeared on many albums displaying his virtuoso vocal ability both as a lead and harmony singer, also showcasing his undoubted instrumental skills to a variety of projects. All these strands come together to make a perfect foil to Alan and his music.

“Alan Reid…a singing voice which comes over as effortless, and undoubted ability as a songwriter. His emotion filled ‘The Road of Tears’ one of the highlights” – THE PERTHSHIRE ADVERTISER

“Robber Barons by Alan Reid, a song of quiet and thoughtful fury rather than furious polemic…” – ROBIN DENSELOW, BBC

“Christine Wheeler’s beautiful voice swirls and layers with her accomplished musical friends to inflate a venue with exquisite ripples of sound. This music is compassionate, powerful and joyful.” – NSW Folk Federation Magazine

“Your performance as a singer and musician is delightful and I was completely taken by how you own this music. Your fellow musicians and singers are also superb in their performances.” – Warren Daly, OAM

New Homes, Extensions & Renovations - we create the space you will love !