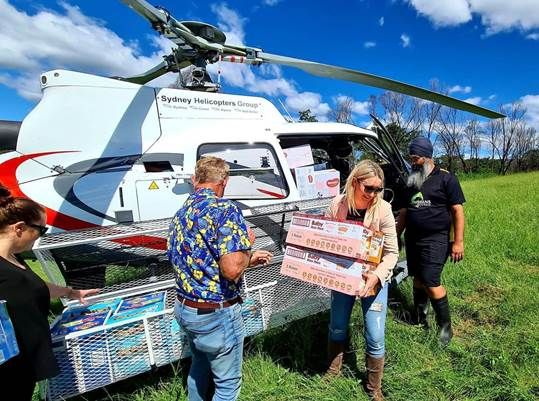 Sarah Richards unloading a private helicopter full of goods, donated by Turbans4Australia during the 2021 flood.
Federal Liberal candidate for the Seat of Macquarie Sarah Richards said that she believes that locals who endured the flooding of 2020 and 2021 will welcome the government’s plans to boost the resilience of the flood evacuation network throughout the Hawkesbury-Nepean Valley.

Richards was a councillor on the front line of the destructive floods that hit in March 2021 and organised for two helicopters to deliver food to stranded residents on the Western side of the Hawkesbury River.

“I stopped by the North Richmond evacuation centre and offered to help. For the next week, my children and I were accepting and delivering food parcels and organising accommodation for scores of evacuated residents,” Ms Richards said.

“Locals were in shock. Prior to these two floods there hadn’t been serious flooding in the area for about 30-years. And, even after the freak event of 2020, I don’t think anyone expected to see another disaster so quickly.”

The Australian and New South Wales governments have announced $33 million in funding for a program to identify more than 100 infrastructure improvements that will boost the resilience of the flood evacuation network throughout the Hawkesbury-Nepean Valley.

“It's great to have a collaborative approach and experts with local knowledge involved in identifying road widening and raising, bridge structures and drainage improvements. It is vital planning work that will save lives and property,” Ms Richards said.

Richards said that she was inspired by the way the locals handled the disaster.

“You get to the metal of people during a crisis. We all pulled together. It was both humbling and an honour to serve my community during this period.

“I had locals from everywhere donating fruit, vegetables, milk and goods. We gathered food for the Salvation Army to feed the evacuees, for nursing homes and for so many others in need,” Ms Richards said.

“Most impressive were the people of the Hawkesbury-Nepean Valley, who despite their own tough predicament, were the first to offer assistance.

“They are just incredibly good people. “ 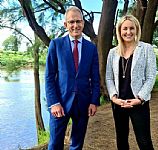