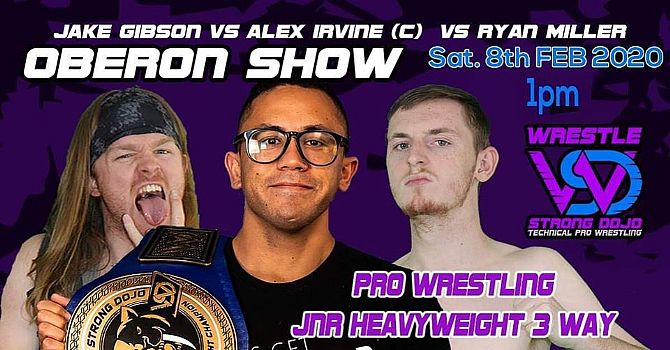 The Dojo will showcase an array of entertaining matches for the whole family including Heavyweight title Tournament matches. JNR Heavyweight title match, Intergender Tag Team wrestling, a women's match and a 5 VS 5 elimination tag team match. Local Oberon wrestler CJ Young will be making his debut

CJ Young not only gets to make his debut for Wrestle Strong Dojo this Saturday but for the young Oberon local it's a dream come true.

"3 years ago I watched pro wrestling at the Oberon Whow and I thought to myself if my goal of becoming a wrestler comes true that would be first choice of where to wrestle. I'm CJ Young I've been a true country boy my whole life. Whether its been living on a farm or in a small town like Oberon I eat sleep and breathe wrestling its my life and now I get to compete in front of family and friends. "

CJ Young will be in tag team action with Paul Hogann "The outback wrestler Paul was quick to add I'm looking forward to seeing all the Paulsters out there at Oberon. Seeing their little faces, knowing they've said their prayers and eaten their Vegemite will give me all the power I need"

Other wrestlers include the masked Luchadore El Mas Terrible who competes in a masked Lucha match against the mysterious Calypso. EL Mas said "In my home country we have festivals like this. We ride the burro, listen to mariachi, we eat the churros and we watch the lucha libre. We celebrate and have fun just like in Oberon.

His opponent Calypso said "Calipso is ready to come out of his shell and make waves at the Oberon Show."

Another wrestler making his debut is yoga master Shaz Namaste. Shaz said "As far as I know I would be the first Bengali (or Bengali Australian) Pro Wrestler on the scene. Growing up I remember arguing with my dad about wanting to become a wrestler and he "persuaded" me to not pursue it. Now that I'm older I understand why he did. It's a physically demanding sport. As a father protecting his child I finally understand it. But a part of me wanted to pursue it. Watching pro wrestling in my teens had lit a small fire that grew and grew over time to now, setting me on the journey of my physical health, mental fortitude and inner peace. I'm using this platform to highlight my skills as an athlete, my charm as a performer and become a guide for my countrymen to break cultural indoctrinations that prevent us from chasing a dream."

Highly decorated and revered Wrestler Dean Draven who will be competing in a heavyweight tournament decider to determine who will go on to the final to decide who will be the first Heavyweight Champion of Wrestle Strong Dojo stated he was looking forward to bringing Strong Style to Oberon.

Wrestler Dean Draven will be competing in a heavyweight tournament decider