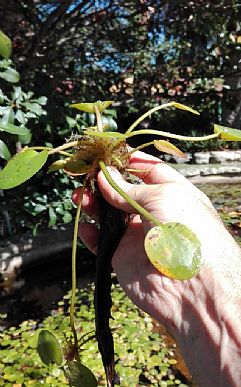 Amazon Frogbit up close.
One of NSW’s highest priority aquatic weeds has been found in the Blue Mountains for the first time.

Blue Mountains City Council’s Biosecurity Officers discovered Amazon Frogbit (Limnobium laevigatum) in an ornamental pond in the backyard of a private home in Glenbrook, during a routine inspection program.

Although in the early stages of establishment in Australia, the weed has the potential to seriously degrade Australia’s ecosystems if left untreated.

“The find is the first known occurrence of this priority aquatic weed in the Blue Mountains,” Cr Greenhill said. “It is a threat to our freshwater wetlands and has to be controlled.”

Under the Biosecurity Act 2015, the plant has been declared as an Appendix 1 priority weed. The Act specifies that "mandatory measures" must be implemented with an aim to eradication.

Although banned from sale since 2014, the plant is sometimes still illegally traded on internet shopping sites such as eBay and Gumtree.

NSW Department of Primary Industries has been alerted to recent sales around the country.

“This occurrence has been reported to the NSW Department of Primary Industries and Council officers have provided technical support and advice to the landholder to ensure effective control of the plant,” Cr Greenhill said.

“We’re taking this opportunity to advise the community to research carefully, prior to purchasing plants online as they may be prohibited matter.

“The purchasing of these plants may put you, the property and the environment at risk. If you believe you may have this plant, a Council officer can provide support regarding its control.”

Amazon Frogbit growing in a fish pond in Glenbrook.