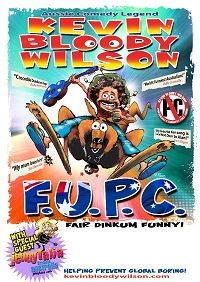 There are few comedians on the touring circuit today who tackle subjects with such aplomb as funnyman Kevin Bloody Wilson. He is politically incorrect, direct, he doesn’t mince his words and he doesn’t rely on subtlety to get his point across – he is a breath of fresh air compared to his contemporaries who often walk about on eggshells.

His directness totally embodies the spirit of Australian humour. In recent times, he has become a social commentator of sorts about political correctness in the current day, so it is apt then that his 2019 Australian tour is a nod to that, the tongue-in-cheek titled F.U.P.C Tour.

Kev is revered around the globe for his Aussie larrikin take on life. He’s performed everywhere throughout his career, from outback pubs to the hallowed halls of the London Palladium, packing out houses wherever he goes. An evening in the company of Kevin Bloody Wilson is jam-packed with entertainment. It is not just a concert performance, it is a full-on event and an opportunity for most to tick off something from their bucket-list – see a ‘national institution’ in concert, done!

Kev has an extensive back catalogue, and audiences can expect to experience them and more at his F.U.P.C Tour, such as fan favourites, like D.I.L.L.I.G.A.F, Dick’taphone, I Knew the Bride (When She Used to be a Mole) and Living Next Door to Alan. His songs have helped define Aussie humour – he is practically the definition of the great Australian comedian. His recently released biography – DILLIGAF: The Life and Rhymes of Kevin Bloody Wilson – is a raucous, earthy in-depth look at a performer who has not bowed to the pressures of political correctness.

Kevin Bloody Wilson’s story is now one of legend. Always a larrikin, he originally recorded songs on a cassette tape for his mates, penned about his experiences working in the mines in Kalgoorlie, Western Australia. In the early 1980s, he put together a tape called Your Average Australian Yobbo and started selling it – sales went into the tens of thousands before it was transferred to LP, where it sold even more. It was just the start of his career and he has never looked back.

Fast forward more than three decades and Kev is a household name throughout Australia and the world. It is hard to believe that it was only 30 or so years ago that he was getting arrested for performing his politically incorrect songs in public. Times have changed though, and Kev even now spots a nomination for Australian of the Year (nominated in 2010). As one of the country’s most prolific performers, and a genuinely nice, down-to-earth bloke to boot, it’s not surprising he has earned the reputation as one of our country’s greatest living treasures.

With many of his songs pushing the boundaries, Kevin Bloody Wilson has earned his place in the entertainment industry without a lot of mainstream media support. His record sales are now nudging the four million mark. All of his CDs and DVDs have achieved gold status globally, with many reaching platinum status. In fact, one album, Kev’s Back, hit quadruple platinum. His recordings can be found all over the world, from outback Australia to Canada. His music has also been preserved for generations to come in the National Film and Sound Archive in Canberra. His fan base stretches from Broken Hill to Buckingham Palace and he has sold-out shows around the world, constantly earning new fans, who are envious of his DILLIGAF attitude.

Don’t miss the legend in a venue near you! 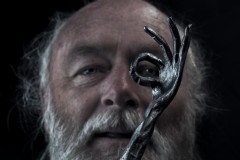