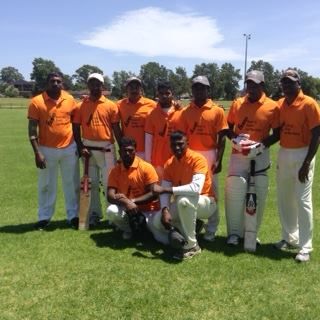 The successful Oceans 12 cricket team
Katoomba resident Noeline Nagle wanted to help refugees. As a member of Blue Mountains Refugee Support group, she has regularly visited Villawood detention centre to spend time with asylum seekers. She saw an opportunity in forming a cricket team for Tamil refugees, and using sport as a way to build confidence.

“I could always talk very freely with the subcontinent men. They love their cricket,” said Noeline.

A former P.E teacher Noeline described the idea of putting together a cricket team for asylum seekers as her “dream.” She approached Wenty League’s Club in Wentworthville, to ask them to sponsor the team. “Without Wenty Leagues, the team would not exist” she said.

“They sponsored me for the Last Man’s Stand competition.”

“I was lucky enough to get a kit together.”

According to Noeline, the Oceans 12 team has been playing together for around 16 months. All members are Tamil refugees who have made the transition out of detention centres around Australia and into the community.

Working on their skills with Noeline, and supported by Anne Marie Clifton who has helped transport Oceans 11, the team has vastly improved. Last December, the team won the fast paced Last Man’s Stand 20-20 competition, having placed runner-up in two previous competitions.

Noeline told Fresh Air Daily that playing cricket together had a positive effect on the Oceans 12 members.

“The difference is staggering,” she said. “They’ve got self-worth. They’ve got confidence. Their English is better.”

She said that the team had never encountered any vilification. “In all the time we have been playing, we have not had any problems.”

“Many of them have made very good friendships through the cricket.”

Last year, the team travelled up to Katoomba to play the Katoomba Cricket Club, an experience that Noeline described as positive. She said that the team often stays in the Blue Mountains. 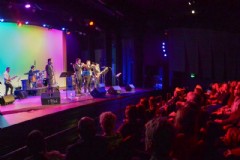 Valentine Day Cadillac Experience
Blue Mountains Limousines & Vintage Cadillacs 1929 "The Gatsby" era Limousine Experience - 30 mins Plus a Rose. "Jump in the back seat of my Cadillac !!"