Photo credit: RMS
As final preparations for the opening of the new pedestrian and cyclist bridge across the Nepean River at Penrith are completed, the name of the new Western Sydney landmark can now be revealed.

Stuart Ayres MP, Member for Penrith said the name has been selected after thorough consultation with the community and in time for the official opening on Sunday 28 October.

“I’m pleased to announce the new pedestrian and cyclist bridge across the Nepean River has been named ‘Yandhai Nepean Crossing’,” Stuart Ayres said.

“This name signifies the language of the Darug people who have strong traditional and historical ties to Western Sydney and the Nepean River as well as providing a clear geographical location of the bridge.”

The word ‘Yandhai’ used to describe the river, means walking in the path of past and present, and is reflective of story including the past use of the river by the Darug yura (person).

The word ‘Nepean’ identifies the location of this amazing bridge and ‘Crossing’ signifies the purpose of the bridge and the use of this location along the river as a significant crossing.

“There is an almost spiritual connection between Penrith residents and the Nepean River, so to be able to bring the history of two great cultures together in the name of this new bridge is very special,” Stuart Ayres said.

Stuart Ayres said Roads and Maritime Services called for name suggestions in July this year ahead of the bridge opening.

“There was a strong response from the community, with more than 300 submissions received in less than a month.”

“It’s not often the community gets the chance to suggest names for new bridges so this was definitely a once-in-a-lifetime opportunity for many people,” Stuart Ayres said.

The community was encouraged to think about names which best described the bridge or had geographical, historical, community or local Aboriginal significance and they provided a wonderful range of suggestions.

A naming committee was formed to choose the future name of the bridge and they spent many hours deliberating on the best fit for this iconic piece of infrastructure.

Stuart Ayres said the new pedestrian and cyclist bridge will encourage the community to get active and make use of the excellent walking routes in the region.

“The NSW Government has worked hard to deliver this project for the community and the ‘Yandhai Nepean Crossing’ will be a local landmark for the Nepean region for years to come,” Stuart Ayres said.

“I thank the community for their excellent suggestions and invite everyone to come along to the bridge opening to celebrate the new landmark at Penrith.”

The official opening will be held at 9.30am, 28 October at Memorial Ave, Penrith. 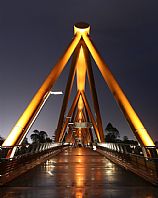