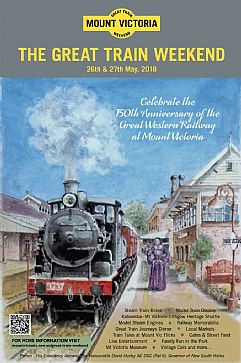 One hundred and fifty years after the Great Western Railway Line through the Blue Mountains reached Mount Victoria, it’s hard to say who loves steam trains more – children or adults.

Train lovers have a special reason to be excited about the 2018 Great Train Weekend. The Garratt 6029 Steam Engine, recently secured by NSW Transport Heritage, will play a major role in our celebration of the 150th Anniversary of the opening of the Great Western Line.

This biggest of Steam Engines is black in colour, manufactured in Manchester UK, and was used on our Western Rail line in the 1950's and 60's for freight.

After the official opening The Honourable TF Bathurst AC, Lieutenant-Governor of NSW and Mrs Bathurst will be given a Vice Regal Salute by the NSW Lancers (Australian Light Horse Association). His Excellency General the Honourable David Hurley AC DSC (Ret’d), Governor of New South Wales is Patron of the event.

Before the Great Western Rail Line opened, travel through the Blue Mountains was difficult. It took at least two days for a horse and carriage to make the trip along Cox’s Road to Bathurst, with an overnight stop at an inn.  The need for a railway increased with rising numbers of travellers heading for the gold fields after the discovery of payable gold at Ophir in 1851.

The 1868 opening of the Great Western Rail Line and its planned extension to Bathurst was of great significance to the growing agricultural industry west of the Blue Mountains and their customers in Sydney and beyond.

An article describing the opening ceremony in Mount Victoria on 1st May 1868 in the newspaper The Empire (2/5/1868) reports the speech of the Earl of Belmore. He said that “the prices charged per ton for conveying goods from Bathurst to Sydney by road had been as high as from £10 to £20 [about $1300 to $2600 at today’s values]. By means of the railway, when the line was completed to Bathurst, the cost of carriage per ton would be reduced to about twenty shillings [about $130 at today’s values]; in many cases probably less, for if a person had traffic enough to engage a truck, his goods night be conveyed at the low charge of a penny per mile per ton”.

The Great Western Railway Line brought new settlers, country retreats and day visitors to the Blue Mountains, resulting in rapid growth for the 26 towns along the line. Imagine how exciting it would have been to be able to come, for the first time, to the Blue Mountains to live, work or holiday because of the new technology of the 19th century! At the same time the traditional owners of the land, the Darug, Gundungurra and Wiradjuri peoples, are likely to have viewed the changes that came with the influx of new people and cultures with dismay and apprehension.

Over 26th and 27th May, the Mount Victoria Community Association is organising train related activities, including a model train display at the historic and beautifully refurbished Mount Victoria Railway Station. Weather permitting there’ll be markets in the park and a child’s trolley “train” ride around the park. Various venues around town will feature live music. This is truly a community event with Mount Victoria businesses and non-profit organisations joining in with their own Great Train Weekend activities. A Buster Keaton silent movie, The General, at Mount Vic Flicks with a musical score and introduction by David Stratton, a “Railway Journeys” dinner at Mount Victoria Manor, “railway” pies and soup at the Victoria and Albert Guesthouse and historic displays at the Mount Victoria Museum are just a some of the activities planned.

The Mount Victoria Community Association would like to acknowledge the financial support of the Foundation for Regional and Rural Renewal, including donor partners FRRR & Friends and Scenic World Blue Mountains.

Trains are being run and provided by Transport Heritage NSW. Tickets for the Sydney/Mount Victoria steam train and rail motor can be booked via the NSW Rail Museum website where information about timetables can also be found. Tickets to other activities will be available on the day in Mount Victoria or by contacting the relevant business.

Eagle View Escape Breathtaking views and experiences
Announcement
Need help with your Company accounts?Speak with one of our friendly staff members today. We are here to help.View Trumans Chartered Accountants »