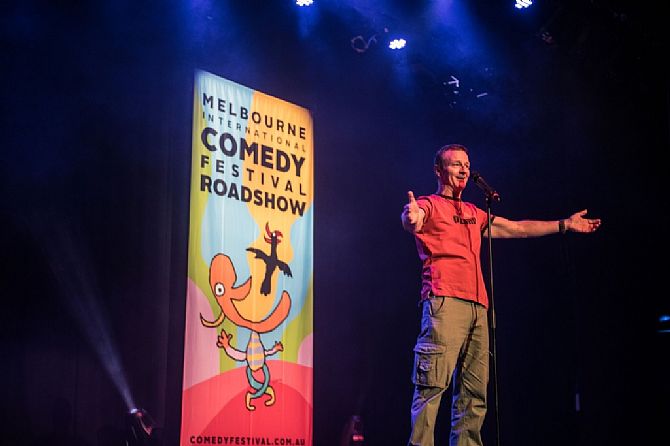 Once again the Melbourne International Comedy Festival is prepping to journey around Australia, home-delivering hot and tasty comic treats to audiences near and far, and the sights are set on The Joan, Penrith Tuesday 19 June at 7:30pm.

Featuring fantastic funny-makers from Australia and beyond, the Roadshow has it all. It’s stand-up, sketch, satire, silliness and song – all in one side-splitting show!

For nearly 20 years this roving tour-de-comedy has visited towns and cities around Australia, from Mildura to Mt Isa and everywhere in between. There’s nowhere its exceptional entertainers fear to tread.

Get ready to join MC Cal Wilson - stand-up comedian of Spicks and Specs, Thank God You’re Here and Have you been Paying Attention? fame at the MICF roadshow.

Comedian, actor, author, sociopath? Bob Franklin will have you wondering with Yours sincerely - a gritty look into the life of a character selling a memoir.

Award-winning musical comedian Gillian Cosgriff has played to sold-out crowds, she’s played to six people and now she’ll play to Penrith! Featuring some of her favourite original songs and reworked old songs this is an unmissable night of Gillian’s best work including Waitressing…and Other Things I Do Well and This Is Why We Can’t Have Nice Things,

Sharul Channa brings her razor sharp, self-deprecating funnies to The Joan. With a father from New Delhi and a mother from Chandigarh in India, Channa will touch on issues ranging from having an identity crisis; when I'm in Singapore, I'm not Singaporean enough. When I'm in India, I'm not Indian enough.

Tom Cashman brings his debut stand-up show Good to Penrith. Tom “tries to be a nice guy” but…. His debut is guaranteed to be a solid hour of laughs as you see how he messes up!

Pack your laughing gear and get on board the Roadshow at The Joan!

WARNING: Performances often contain coarse language, sexual references and material that can offend. It is recommended for people aged 15 years or older.