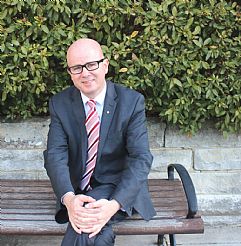 Mayor, Cr Mark Greenhill said of his fifth term as Mayor, “I am humbled and deeply moved to be returned as Mayor of the Blue Mountains.

“I congratulate Deputy Mayor Chris Van der Kley and Alternate Deputy Mayor, Romola Hollywood, on their re-election. We are a good team working with unity and shared purpose. Their support is so important to me and to our City.”

“Our number one duty to this City is dealing with the issues that have concerned us around the management of asbestos and the key issue is getting it right for the workers.”

Cr Greenhill said the next few months would be challenging, as the Council responds to the Public Inquiry into Blue Mountains City Council, called by the Minister for Local Government.

“We will cooperate in the Inquiry fully and openly”, he said. “If there are lessons to be learned or mistakes to be corrected, we want to know. There is nothing more important than ensuring the safety of our workforce and our community.”

“We have made considerable progress to improve our governance and systems to ensure safety is at the centre of the Council’s operations and culture”, the Mayor said. “More remains to be done. This work will continue as a priority focus of the Council into the future.”

“I believe the Council has demonstrated a responsive and proactive approach to these challenges and strong leadership on a range of complex matters”, he said.

The Mayor said that overall, the Council performed well considering the challenges it faced during the year. “Our end of year results for 2017/18 show we are on track to achieving the priorities set for the four-year delivery program, and we remain financially viable”, he said.

I look forward to continuing to working together with the elected Council, the General Manager, and the community in the best interests of the City as we maintain our focus on building a sustainable and successful future for the Blue Mountains.