Mayor Calls for Comm Bank to Rethink Closure in Blaxland The Commonwealth Bank announced the decision to close the Blaxland Branch in late April citing declining patronage as the reason. The closure is slated for 25 May 2018.

Mayor, Cr Mark Greenhill, said, “Having no bank branches in the lower Mountains is unacceptable. With bank profits at record highs, the Commonwealth Bank needs to be reminded of the needs of small communities such as Blaxland.

"It is not good enough to put profits over people to the point where there is no bank branch in the most densely populated part of the Blue Mountains.”

Susan Templeman MP said that banks bring in customers for other retailers and businesses in the area, as well as make it easier for the businesses to do their banking.

“I congratulate Council’s advocacy on this issue as it particularly supports local small business,”  she said. “I have already spoken to Blaxland retailers who say they will move their banking to a new provider if someone fills the gap left by the Commonwealth.”

“There will be no bank available between Springwood and Emu Plains,” said the Mayor. “The decision by the Commonwealth Bank will have a significant impact on a large number of people - especially older and less mobile residents, local businesses, and of course the branch staff who may be out of a job.”

Many local councils and community organisations have expressed their concern at the harm done to local business when the town loses its bank branch as residents tend to do their shopping in the centre where there is a bank branch.

The Mayor said, “This is the last of the big four banks selling out on the Blue Mountains.”

We will be approaching community-minded banks, including the Bendigo Bank, to express the Council’s support for a replacement banking service in Blaxland. 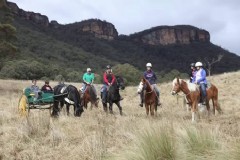