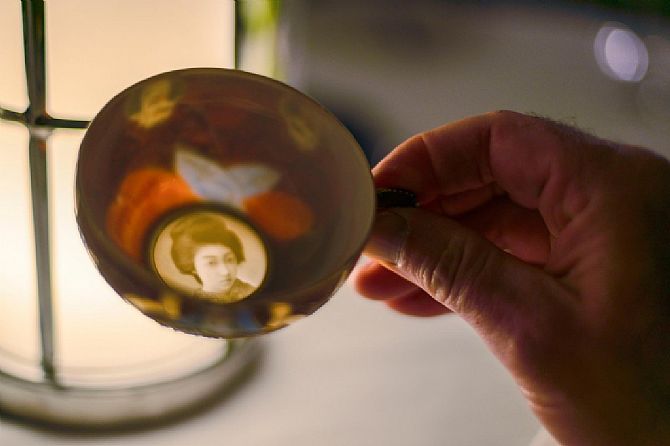 Photos - David Hill, Deep Hill Media
A majestic piece of Mark Foy memorabilia has been returned to his legendary "Palace in the wilderness" at Medlow Bath, almost a century after it was crafted.

The rare Japanese vintage tea set made from the finest porcelain and owned by the original owner of the Hydro Majestic Hotel was donated to current hotel owners Escarpment Group by Maree Statham of Portland.

Gifted by Foy to Sam Ewen who managed his farm Newbridge in NSW, the tea set is beautifully hand painted with gold trim and embossed with a scene of geisha women from the early 1920s Showa Period.

"The Hydro Majestic holds almost legendary status in hotel, indeed national history and we never take for granted the far-reaching connections the Hydro Majestic and Mark Foy have had throughout the generations.

"We are so grateful to Ms Statham for parting with such a beautiful piece of memorabilia so it can be shared with many more."

Ms Statham, a long-time Lithgow Councillor, said the tea set was gifted to her by her cousin Gwen Ewen, the daughter of Sam Ewen:

"For several decades once a month I would drive my grandfather, Mr William Lowe (Bill) to visit Sam and his wife Ellen, who was my grandfather’s sister," Ms Statham said.

"My grandfather was very close to Aunty Ellen, and she was always delighted to see us and mentioned regularly that she was so grateful that I would drive my grandfather to Newbridge as my grandfather did not drive.

"After the death of Aunty Ellen I was presented with the tea set by her daughter Gwen.

"I value the significance of this wonderful gesture and have cared for the tea Set for twenty years, but now feel it most appropriate to gift this valued unusual tea set back to the Hydro Majestic."

The tea set is on display, along with numerous other memorabilia in the Hydro Majestic Pavilion, Great Western Hwy, Medlow Bath, from 9am to 5pm daily.

Enjoy the fresh air and the peacefulness of Blackheath!