Lithgow Remembers Those Who Served in World War One 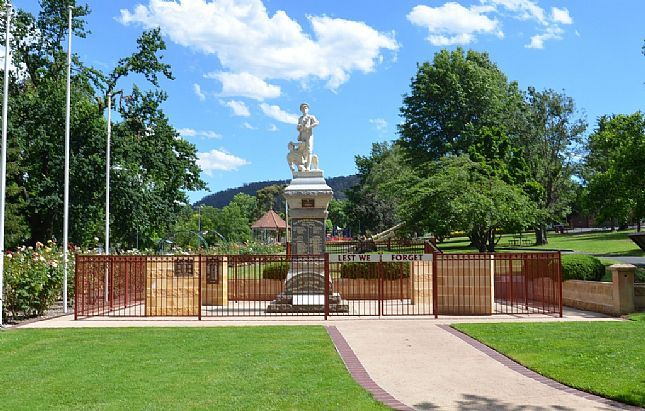 A plaque commemorating Lithgow residents who served in World War One is to be unveiled at this year’s Remembrance Day Ceremony at Queen Elizabeth Park at 11:00am on Sunday 11 November.

The new plaque containing 762 names is the project of the Lithgow World War 1 Commemorative Plaque Project Committee, with the research undertaken by Portland man Ian Burrett whose father Lt Col Joe Burrett DSO (Distinguished Service Order) served in World War One including at Lone Pine in Gallipoli. The plaque also includes Captain Jack Hamilton VC, born in Orange but who lived with his parents in Oakey Park during his school years and was awarded the Victoria Cross for his heroic actions at Lone Pine in Gallipoli.

“I commend the Commemorative Plaque Committee and Ian Burrett and for their achievements in bringing this project to completion,” said Lithgow City Council Mayor Ray Thompson. “Lithgow was a much smaller town in those days, and there was no conscription, so it is all the more remarkable that so many Lithgow men and women decided to serve their country in such a terrible conflict that claimed the lives of so many. I recognise a number of the family names listed on the plaque so I encourage the community to attend this year’s Remembrance Day Ceremony and to see if their family ancestors are listed there. The list of names will also be available on Lithgow City Council’s website.”

“I have long thought that the Lithgow War Memorial should recognise all those who served in World War One,” said Ian Burrett. “It has taken a long time and a lengthy period of research, so I am delighted that we finally get to honour those who gave so much in defence of their country and empire. I also appreciate the support of Lithgow City Council and the Lithgow RSL Sub-Branch in assisting the Commemorative Plaque Project Committee to undertake this project.”

To coincide with the plaque unveiling, Mr Burrett has donated a Lone Pine tree which is a descendant of cones collected from Turkish trenches at Lone Pine by Charles Smith of the 3rd Battalion. The tree has been planted near the Queen Elizabeth Park Cenotaph together with a sign that describes Lithgow’s connection to Lone Pine.