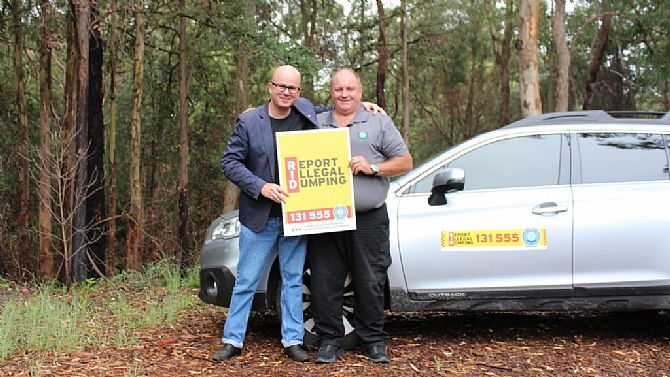 Mayor Mark Greenhill and Western Sydney RID squad co-ordinator Leon Marskell.
The dedicated team of professional investigators from the Western Sydney based Regional Illegal Dumping Squad (RID) have been fighting illegal dumping across the Sydney Region for the past two decades and they expanded their operations into the Blue Mountains this month.

Mayor, Cr Mark Greenhill, said, “Illegal dumping continues to be an unsightly, costly and at times dangerous scourge on our community. It is not acceptable in any community.”

Data* provided to the RID Squad shows there is approximately 600 illegal dumping incidents in the Blue Mountains per year, with the average clean-up costs of over $269,000 per year.

“I urge residents to report any person or vehicle seen illegally dumping on your street, in your parks, reserves or bushland by calling Council on 4780 5000 or the RID hotline on 131 555. Council is working very closely with the RID squad to investigate these offences,” said the Mayor.

RID Program Co-ordinator Leon Marskell said, “Reporting incidents of illegal dumping immediately means that RID officers have a better chance of catching the offenders. These people will be fined or prosecuted.

“We can always clean up rubbish after it’s dumped, but catching the dumpers sends a strong message that they won’t get away with their illegal activities. This is how we can make significant ground towards breaking the illegal dumping cycle.”

RID Squad Investigators will undertake high visibility patrols across the Blue Mountains as well as conduct covert surveillance and participate in specific joint Government agency operations with the Environment Protection Authority, Roads and Maritime Services and the NSW Police Force across the region in the coming 12 months.

“Information provided by the public is often the key in identifying dumpers – information such as a photo, a registration number or the name of a person or company you saw dumping the waste helps our investigations. If you see illegal dumping occurring, please speak up,” Mr Marskell said.

The RID Squad was formed in 1999 to focus on illegal dumping in Western Sydney.

Supported by the NSW Environment Protection Authority with funding from the waste levy.

Glenbrook Cinema Your local indpendent cinema
Announcement
Does your Super cover insurance?Has your Super got you covered for insurance? With COVID-19, maybe not ... read onView Trumans Chartered Accountants »