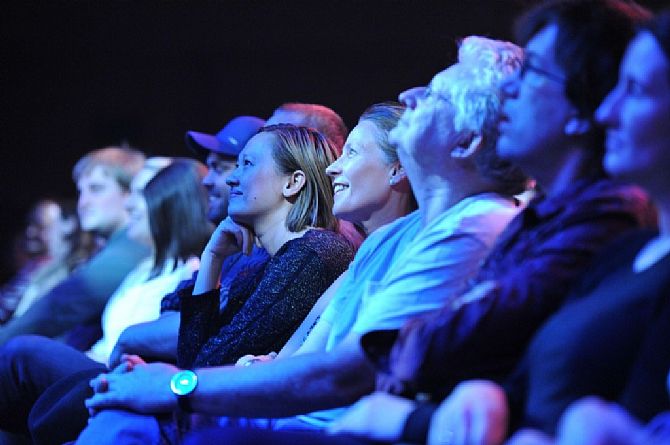 Comedy at The Joan
From young guns to super stars – The Joan presents the funniest shows in town with a packed comedy calendar to bring you a year filled with laughter.

Kicking things off on 17 February, Ben McCarthy hits his stride on the road to …Nevermind. Expect big things in this wildly entertaining stand-up show covering the trials and tribulations of a comedian on the rise, the wonderful world of dating; as well as travel experiences and personal stories from this talented young artist. Ben McCarthy is bringing his highly relateable brand of schtick to The Joan on the back of a sold-out Melbourne International Comedy Festival season.

As a performer, he is charming and garners the audience’s goodwill with a natural air of hilarity, light cynicism and a hint of self-depreciation. A down to earth affable bloke. – Beat.

This May, award-winning creator and performer Daniel Tobias condenses his life into a smart and scintillating show telling of his almost-death experience. The Orchid and the Crow is a solo performance: part storytelling, part cabaret, part theatre, featuring original songs from the award-winning writers of Die Roten Punkte and Keating! The Musical. An original, accessible and brilliantly clever story that will strike a powerful chord as it deals with rarely discussed themes in a comical form.

Tobias is an intelligent, dynamic and honest performer who is highly entertaining to watch. This show will renew your faith in love, life, and possibly even Lance Armstrong. CBC, CANADA

An absolute must-see comedy simply by virtue of tackling religion and cancer without relying on cheap jokes or tastelessness…a fantastic, dramatic, hilarious show” – The Music

Also in May, Anh Do, one of Australia’s most talented comedians delves deep into his own life’s joys and sorrows, resulting in an unforgettable and uplifting night at the theatre with The Happiest Refugee Live. There are just a few tickets remaining for Anh Do’s second show on 8 May, so get in quickly as the first show sold out in a flash.

Buckle up Penrith, the Melbourne International Comedy Festival Roadshow arrives in June to deliver the freshest and funniest from Australia’s largest comedy festival! With an all-killer, no-filler cast of Australian stars, talented newcomers and international performers MICF has all your comedy bases covered.

What comic calendar would be complete without the indefatigable kings of comedy, sorcerers of satire and masters of mockery? Keep September free for another glorious round of political satire when Jonathan Biggins and Drew Forsythe’s The Wharf Revue 2018 returns to The Joan.

Make sure you book tickets to some of the hottest artists across Australia as The Joan brings the funnies to you!

Warning most comedy shows contain coarse language, sexual references and material that can offend, suitable for 15+.

Daniel Tobias - The Orchid and the Crow