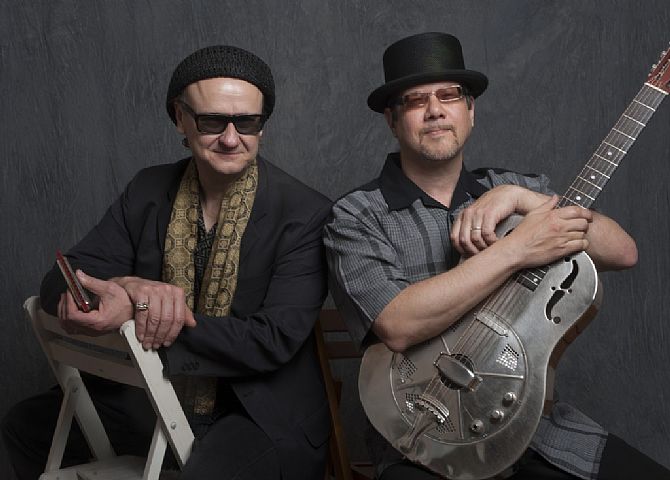 The blues and roots music duo Joe Filisko and Eric Noden make an unforgettable impression. Their jaw-dropping virtuosity enables them to create more layers of sound and feeling than most full bands can summon, and both are high-energy, ultra-rhythmic performers.

The collective result, in both their live shows and their recordings are charged, dramatic performances that are simultaneously powerful and sophisticatedly subtle.

Joe Filisko is a master of all the classic blues harmonica styles. As Dennis Gruenling of Blues Review says, “Joe Filisko could be the best pre-war blues harmonica stylist in the world today.” Kim Wilson of The Fabulous Thunderbirds agrees: “Joe is one of the rare talents on the instrument of the harmonica. He is the guy that does what most players can’t even think about doing.” In addition, Jerry Portnoy who has played harmonica with Muddy Waters and Eric Clapton says, “Joe plays to the strengths and unique capabilities of the instrument and employs the full range of tonal colours, trills, flutters, chord rhythms, and other special effects that make his playing so expressive – all in service of the music. My admiration for his skill and musicianship is boundless.” Filisko is not only an accomplished performer, but a skilled harmonica craftsman as well.

Eric Noden is a master bluesman in his own right. Deeply rooted in the music of 20s & 30s blues pioneers, Eric Noden’s percussive guitar work, timeless song writing and well-travelled blues vocals have earned the respect of audiences, critics, and musicians worldwide. The Illinois Entertainer described Eric “As a spiritual heir to Chicago blues guitarists of the 20s and 30s like Tampa Red and Big Bill Broonzy. This multi-talented acoustic artist fills an important niche in the city’s mostly plugged-in blues scene.” Similarly, Eric’s mastery was recognised in Cadence: “Intent on mastering older styles while transporting them and us into a new century where the past is not forgotten” The Milwaukee Journal Sentinal adds, “The Chicago-based bluesman makes a National Resonator guitar absolutely wail.” Eric Noden sings, shouts and stomps while conjuring old spirits from the strings of his acoustic guitar. Varying his approach from song to song, Noden draws from a deep well of American music that fuels his high energy performances. His right hand thumb often lays down a driving bass figure that weaves around intricate melodic parts played with his fingers. This style, favoured by early bluesmen like Charley Patton, Reverend Gary Davis, and Blind Blake, is one that only a few contemporary bluesmen have mastered.

“Two marvellous musicians who have captured not only the sounds but the emotional spirit of some of the richest bloodlines of American music.” — Kim Field, author of Harmonicas, Harps, and Heavy Breathers

“Joe Filisko and Eric Noden make a thoroughly convincing case that this music is the real deal and their spirited performances make it sound both fresh and contemporary.” – Dirty Linen

“Eric and Joe are possessed by the spirits of Howlin Wolf, Sonny Terry, Robert Johnson, Johnny Woods, Sonny Boy Williamson, Gwen Foster and transported listeners back to the 1920’s Delta.. We love Eric and Joe. Please send them back.? — Mickey Raphael, harmonica player for Willie Nelson

The Metropole is a family friendly venue!
*Minors must be accompanied by a parent or guardian and supervised.
Children do require a ticket for entry.