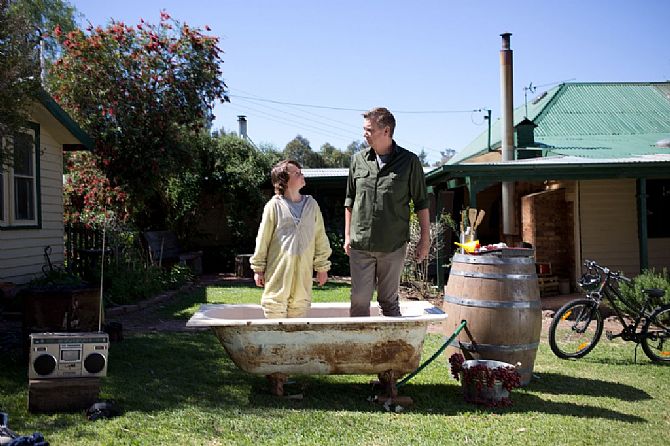 A story with a big heart, plenty of laughs and lashings of sweet and sour chicken kiev, The Merger hits cinemas in the Blue Mountains this week, Thursday 18th – Wednesday 24th October.

The film is changing perceptions on how people feel about refugees, and connecting with audiences in a really powerful way.  With Amnesty International using the film to promote #mynewneighbour campaign, this film is sure to be an Aussie classic.

Tickets are limited, so be sure to get your tickets online and see what all the fuss is about.  The film is being compared to The Dish & The Castle!

The film had its world premiere as the Gala Centerpiece at MIFF, and was shortlisted for the CinefestOz Festival Prize, with sell-out national premieres in Melbourne, Sydney, Wagga and across the country, a major achievement for an independent Aussie film.

The Merger is the tale of a struggling, small town footy team that recruits refugees to survive. Reuniting the crew that created cult hit Backyard Ashes, director Mark Grentell and producer Anne Robinson join forces with comedian/actor/writer Damian Callinan once again to adapt to the screen his award-winning, stage show of the same name.

“The Merger is this wonderful heart-warming film with so many themes it’s hard to pin point what it’s most resonating is.” – Jason Cook

“If this were a wine, I’d say it had roots in the flavours of The Castle.” – Paul Byrnes, The Age/SMH

The township of Bodgy Creek has seen better days: the population is dwindling, jobs are scarce and the litter has built up around the fading Tidy Town sign. The next victim of the town’s decline is the cash-strapped Aussie Rules footy club. Living a hermit-like existence on the town’s fringe, former football star Troy Carrington is coaxed into coaching after striking up an unlikely friendship with young Neil who is struggling with the recent loss of his father. Teaming up with Neil's mum Angie (Mulvany) who is running a nearby refugee support centre, they conspire to recruit refugees to ensure the team survives.

With the world facing the worst humanitarian refugee crisis since World War II, this film is timely. With its simple messages of empathy, respect and spirit of a fair-go, it places the larger global tragedy into the smaller context of the changing face of Australian rural life.

The struggling footy team – who resound with the Aussie battler war-cry “keep doing it until you’re not sh*t” – is but a canvas upon which a new, more accepting culturally diverse Australia can be painted.

“When you bother to listen and learn from what our refugees have actually been through, wanting to turn them away isn’t an option,” said Damian Callinan.

The message of inclusivity in The Merger isn’t just limited to the story on screen. The supporting cast includes many settled refugees - director of photography Tony Luu was born on the boat as his family fled Vietnam, Francis Kamara, a refugee from Sierra Leone, plays one of the main refugee characters, Didier, and David Bridie’s film score includes many refugee musicians, including Kurdish asylum seeker Farhad Bandesh who is still stuck on Manus Island.

The film, which has been officially endorsed by the AFL, was shot on location in Wagga and surrounding shires with with major production investment from Screen Australia in association with Create NSW, and financed with support from the City of Wagga.

For more information go to: The Merger Movie Facebook page