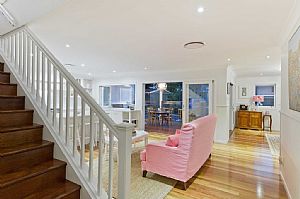 First home buyers across Macquarie will be helped into the housing market by a re-elected Morrison Government, as it helps them deal with one of the biggest barriers to owning their own home.

Liberal Candidate for Macquarie, Sarah Richards, said the First Home Loan Deposit Scheme from a re-elected Morrison Government would provide great help from January 1 next year to first home buyers with a 5% deposit, saving them from having to pay for expensive mortgage insurance.

“We all know how hard it can be to get into the housing market and buy your first home, as most lenders need a 20% minimum deposit or force you to pay thousands of dollars for mortgage insurance,” said Ms Richards. “That can push back the dream of owning your own home by years.”

Loans would be supported by the National Housing Finance and Investment Corporation (NHFIC), allowing lenders to offer loans they would otherwise turn down or would require lenders mortgage insurance on.

The scheme will be available to first-home buyers with an income of up to $125,000, or $200,000 for a couple who are both first home buyers. For example, if the eligible first home buyers want to buy their first home valued at $600,000, instead of having to save for a deposit of $120,000 they will need to only save $30,000. The Scheme will be capped to a house price value determined on a regional basis, reflecting the different property markets across Australia.

The new First Home Loan Deposit Scheme, together with our existing First Home Super Saver Scheme that allows Australians to save for a deposit faster through superannuation accounts, will help people to buy their first homes years earlier.

Last year 110,000 Australians bought their first home, the highest level in nine years. The Morrison Government wants to build on this result.

Ms Richards said that a re-elected Morrison Government’s plan to back first home buyers stands in stark contrast with Bill Shorten and the Labor Party, who want to abolish the First Home Super Saver Scheme and jack up rents with their Housing Tax, making it tougher for first home buyers to get into the market.

Experts have estimated that Labor’s Housing Tax would result in house prices falling by as much as 16 per cent and rents up as much as 22 per cent.

“Labor’s devastating Housing Tax is a $32 billion tax grab hitting all Australians,” said Ms Richards. “If you own your home it will be worth less, and if you rent you’ll pay more.”

“Only the Morrison Government will continue to deliver a strong economy and record jobs growth, help first home buyers, and protect the value of your home.”