Hundreds of Western Sydney hockey players are set to benefit from $1.2 million worth of upgrades at hockey fields at Kingswood and Narellan which will increase the quality and capacity of facilities and bring them to international standard.

Minister for Sport Stuart Ayres joined the CEO of Hockey NSW David Thompson to announce funding support for upgrades to the Macarthur Regional Hockey Complex at Narellan and the Western Sydney Hockey Centre at Kingswood.

“Western Sydney boasts a strong sporting landscape and by investing in the right kind of facilities we can boost participation and offer a vision for players to the elite pathway,” Mr Ayres said.

“As hockey grows, our facilities need to diversify and offer more. This investment at Nepean will upgrade the second turf surface from sand to full international standard.”

Member for Camden Chris Patterson said the NSW Government investment of  $600,000 to upgrade the third field at Narellan will open up further growth opportunities and increase capacity for schools and multi sport activities.

“Narellan will soon boast some of the best hockey facilities in Australia, to be delivered in time for the Under 15 Australian National Hockey Championships at the Macarthur Regional Hockey Centre in April next year,” Mr Patterson said.

Metropolitan South West Hockey Association President Wayne Southwell said: “This work will allow all competition games to be played on a water based field which enables a faster, more skillful game, meaning the overall standard of our hockey will improve.”

Hockey NSW CEO David Thompson said: “This is a fantastic day for the thousands of hockey participants in Western Sydney.” 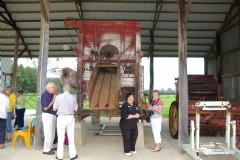