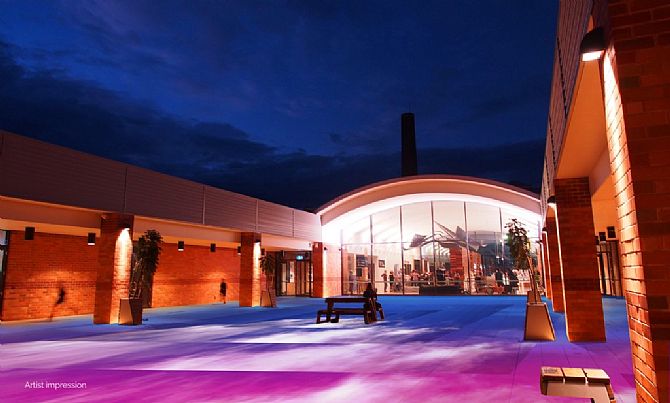 Have you had the experience of music where it took you to another place in your imagination? Or have you been to places where you could imagine music emanating from the landscape, where you could literally sense it inside your mind?

A new audiovisual performance project asks these very questions. Entitled States of Suspension, the music, sound and light event to be held at the Blue Mountains Cultural Centre examines the phenomenon of spatio-temporal suspension, where time and space appears momentarily suspended in a realm of imaginative thought. By utilising the unique visual and acoustic qualities of the Cultural Centre courtyard set against the twilight backdrop of a world-heritage national park, the thought-provoking artwork provides audiences with an opportunity to experience time and space ‘suspended’ in music, sound and imagery.

The idea for the project came from audiovisual artist Peter Long as part of his PhD research into aesthetic approaches to the suspension phenomenon in music and imagery. “When I was a kid, I often fell into this kind of state when hearing music from a distance or in a reverberant environment, there was a magical, almost trance-like quality to it, so I began to investigate what exactly was happening. What I’ve observed is the spatial environment that music is received in plays a large part in how we apprehend it, apart from musical factors, and when sound becomes abstracted, our minds appear to construct other realities to make sense of it. This is where imagination and the quality of fantasy emerges, which has been exploited in music by everyone from Pink Floyd to Brian Eno and more recently bands like Tame Impala and Radiohead. There’s also patterns occurring in nature that appear to echo those in music and imagery, so how we interact with environments also seems to inform aspects of art and music.”

Far from being homage to psychedelic or ambient music, States of Suspension attempts to create an immersive fusion of music, sound and moving imagery. With music performed at dusk by local improvisation group Paper Sun, the event utilises the echoed surroundings of the Cultural Centre courtyard in conjunction with projections and lighting to realise the suspended state. The open sky of the courtyard at night also contributes to the effect, with the transition of twilight combining with mesmerising projections and lighting. States of Suspension commences at 8pm on February 2 following the opening of the Blue Mountains Film and Portrait exhibition at the Cultural Centre, and is free of charge to enter.

It promises to be a thought-provoking, one-time only event for the entire community - be sure not to miss it!

Scenic World Sky high dining Panoramic views
Announcement
Dinosaur Valley is returning this summerCatch a T-rex in action, see a migrating triceratops family feeding in the valley - everyone will have a roaring timeView Scenic World »