Enjoy a Visit to Sculpture at Scenic World Calling upon the Owl – Nick Warfield. Image Ⓒ Fresh Air Daily
Fresh Air Daily visited Sculpture at Scenic World last week to experience firsthand the transformation of the Jurassic rainforest into a world class exhibition space. These are a few of our favourite pieces.

Blind – Andrew Townsend & Suzie Bleach (NSW)
Made from steel, lead and salvaged objects
Few animals have formed such a fundamental partnership with humans as the horse.
Blind has a reference point with the shale and coal mining activity that occurred at the Scenic World site during the nineteenth and early twentieth centuries. Imagining the Past Before it Happens - Jan Cleveringa (NSW)
Made from 5000 discarded fluorescent light globes, sensors, LEDs, sound/speaker and tape
Imagining the Past Before it Happens is an ironic art installation about sustainability, waste and prophetic hindsight regarding the culture of business. Five-thousand functional but discarded fluorescent light globes are re-imagined and lit up by the artist with LED lighting that is replacing them. Listen out for the sound of breaking globes as visitors trigger sensors. Imagining the Past Before it Happens - Jan Cleveringa. Image ? Fresh Air Daily

Calling Upon the Owl – Nick Warfield (NSW)
Made from aluminium RHS framework and salvaged plastic automobile bumper bars
The Wilderness in an Owl’s eye It speaks an ancient wisdom “I’ve got my eye on you” it says whilst also saying (but what is your place here in this forest?)” 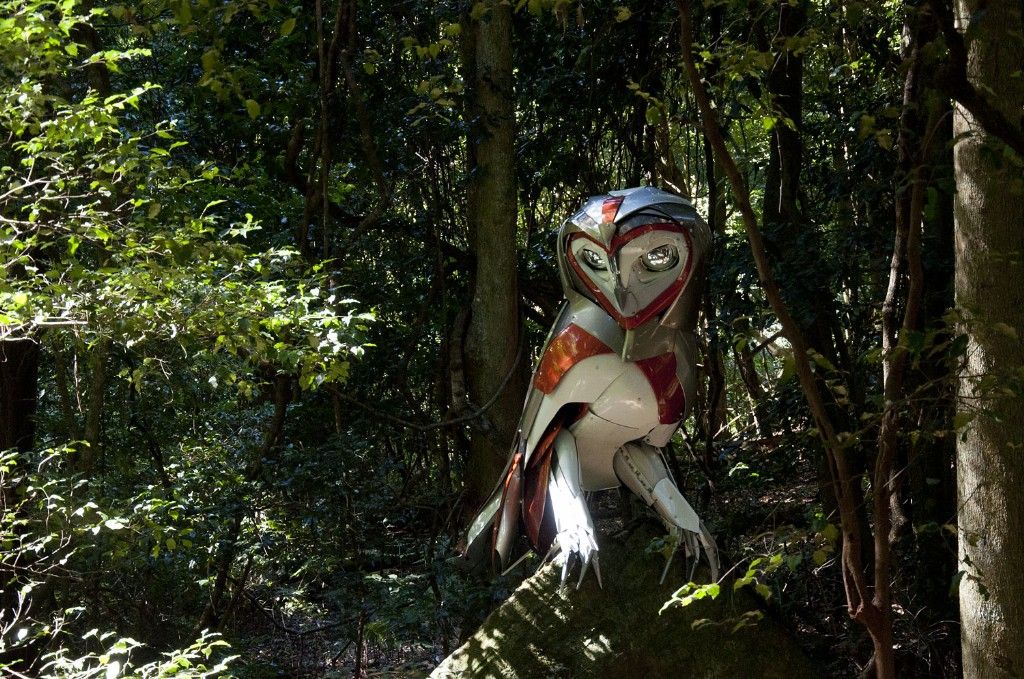 Up - Kayo Yokoyama (Blue Mountains)
Made from glass blown balloons – including two popped balloons.
Kayo wanted to bring some colour and joy to the exhibition and make each visitor smile. 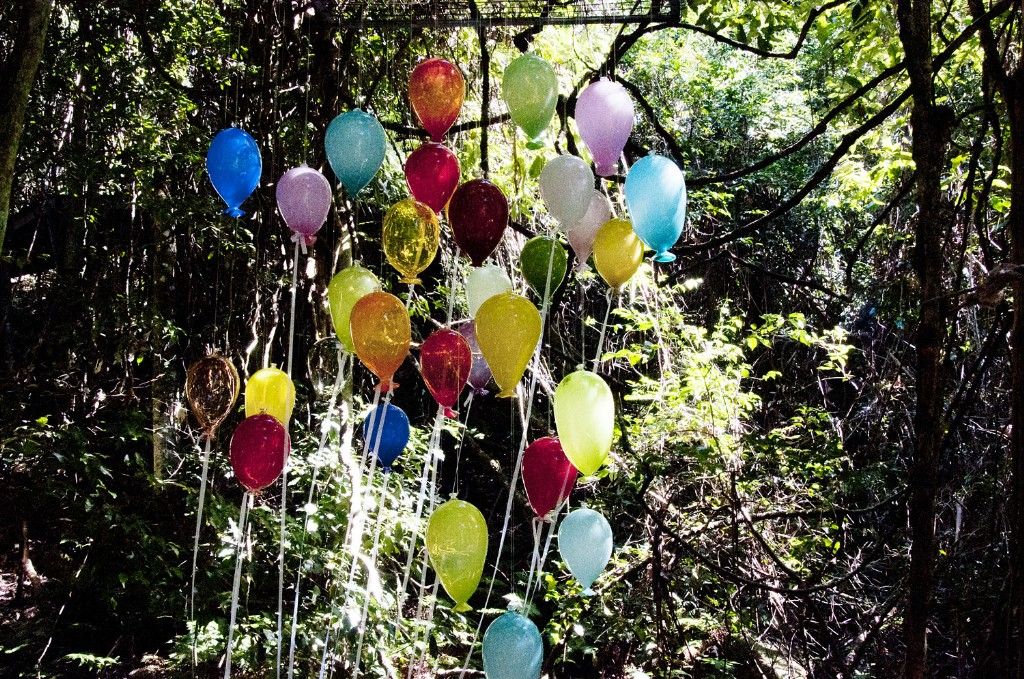 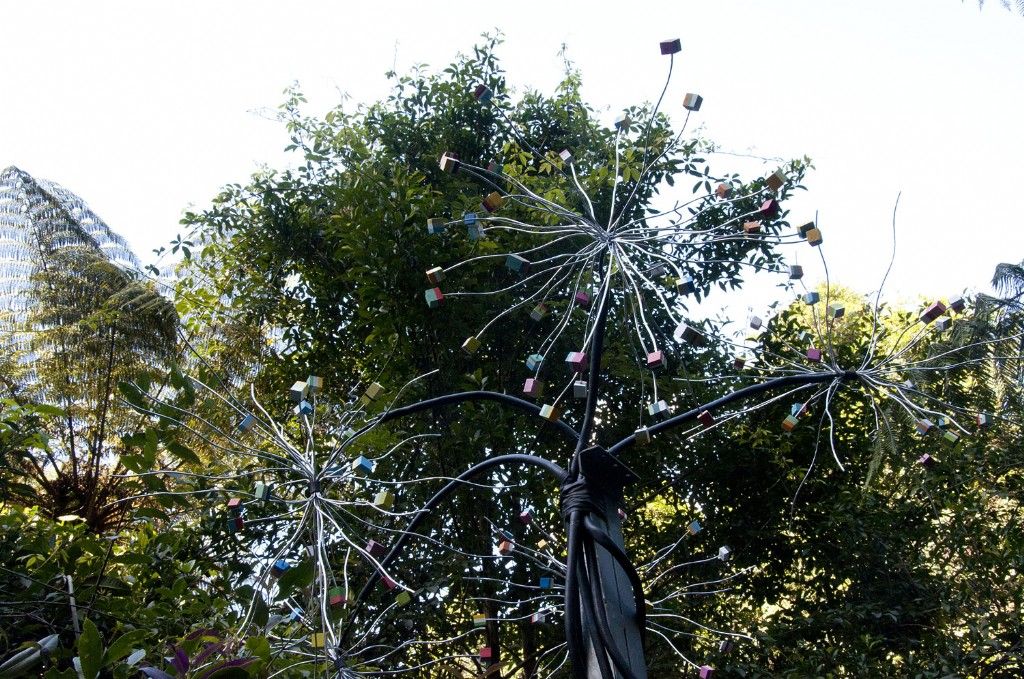 Stack – Clara Hali (Blue Mountains)
Made from bronze and corten steel.
Stack is the amalgamation of landscape and yoga into a figurative form. The Blue Mountains geology symbolizes the duality of fragility and strength in humans, while yoga represents the struggle to find balance. Grounded – Charlie Trivers (NSW)
Made from carved recycled Australian wood.
Grounded is about returning timber offcuts and placing them as sculptural pieces in the eucalypt forests similar to where they came from. 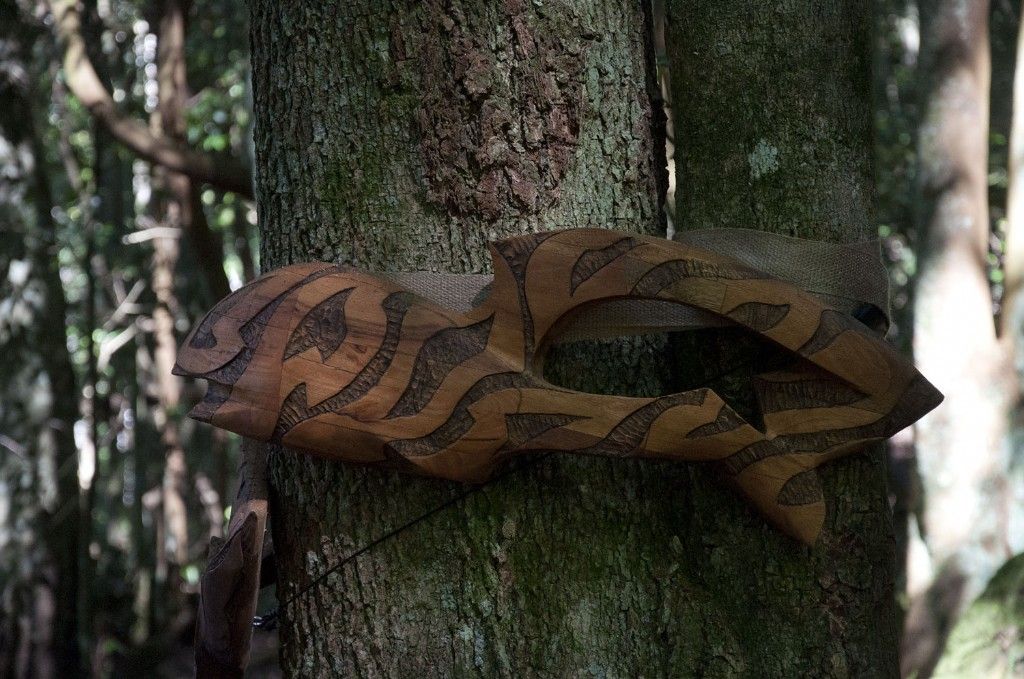 Shaft – Jane Gillings (NSW)
Made from discarded clear plastic objects.
“A shaft of light. A mine shaft. So much of our light comes from the darkness of coal. A paradox we need to address.” Quaver – Mitchell Thomas & Bronwen Williams (NSW)
Fibreglass sheets with stone veneer placed in 3 locations around the boardwalk. Sit and listen to the sounds as they reverberate around you. The three sheets feature a flat panel speaker making the entire surface a speaker. Anastasis – Caitlin Hughes (Blue Mountains)
Made from smalti, oro and porcelain mosaic over fibreglass, wire and cement substrate.
Anastasis reminds us of the resilience and capacity of the bush and local community to regenerate and to flourish after the adversity of bushfire. 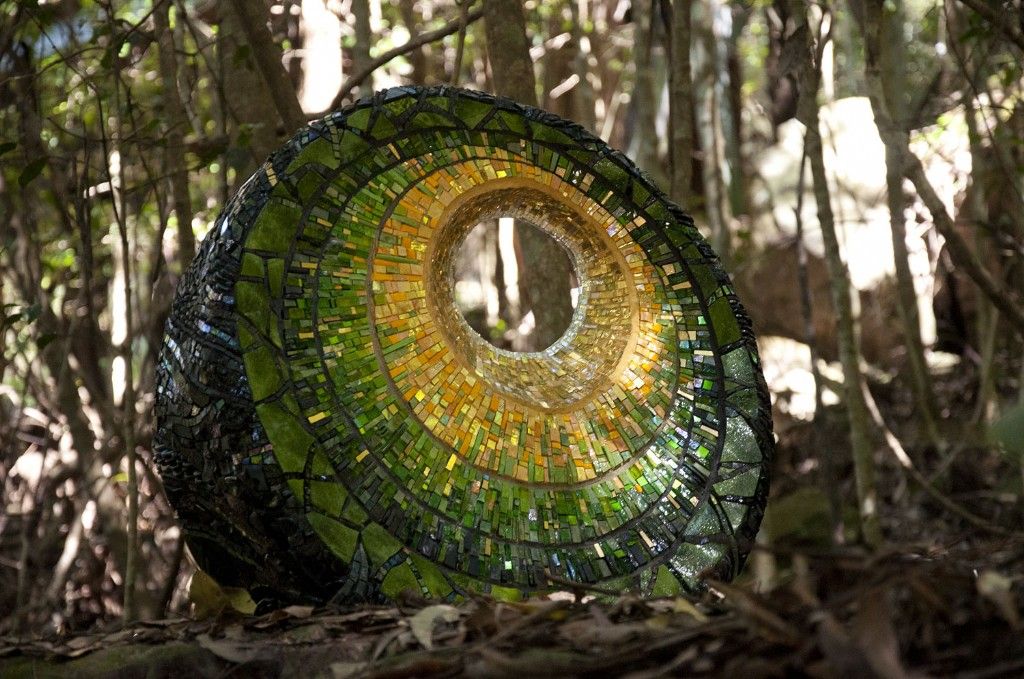 Lost Fossil – Oliver Ashworth-Martin (Victoria)
Made from Queen Palm seed cases.
Lost Fossil speaks of a time long gone, to those other-worldly forms of ancient flora & fauna. Has this organic structure been permanently fossilised, or is it about to open up and reveal new secrets to the forest? The Drowned World – Jacek Wankowski (NSW)
Made from single-layer fibreglass and resin, paint, rope and life-jackets.
The Drowned World is a commentary on global warming and the resulting changes in sea level and climate. 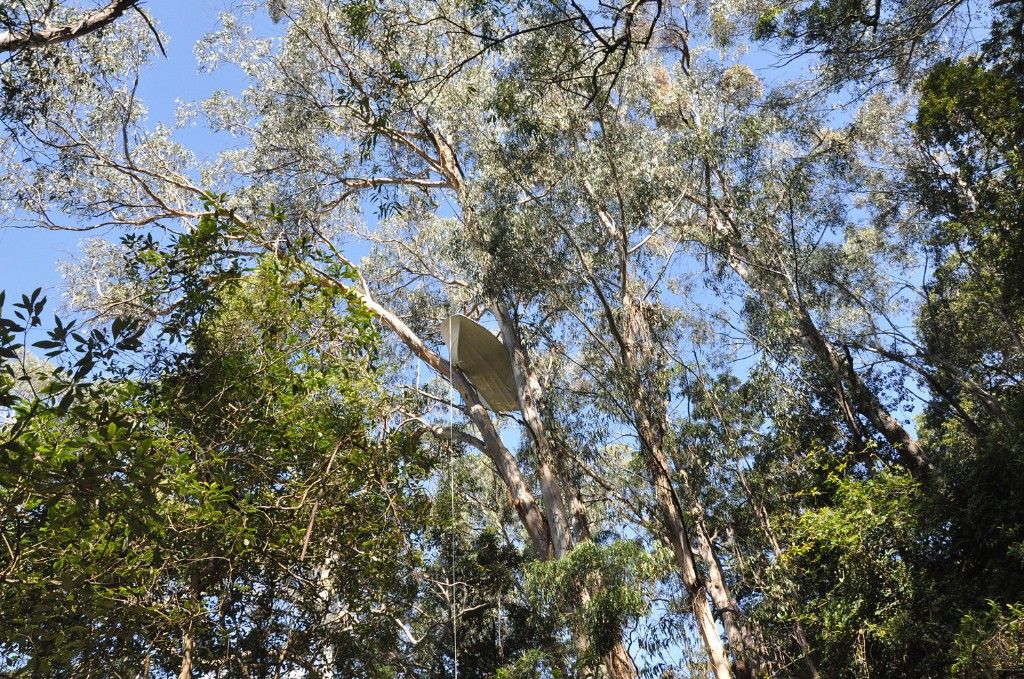 Duty Free (Koala) – Linelle Stepto (NSW)
The series Duty Free asks us to consider the relationship between the human and a mediated, sanitised nature we can see but need never touch, a regularised, commodified and consumable experience. Shards of Existence – Douglas Blake (Blue Mountains)
Materials include bones, banksia, timber, metal, cups, plates etc.
A shard representative of the transient nature of existing upon a site and the entropy of existence forming multifaceted interoperable multicultural layers that remain long after the spirits that carried the materials to the site have departed. What lies beneath – Nicole de Mestre (NSW)
Made from recycled fan guards and cable ties.
The oldest rocks in the Blue Mountains are formed from skeletons of single-celled algae deposited on ancient seabeds millions of years ago. Microscopic images of their exoskeletons resemble fan guards. 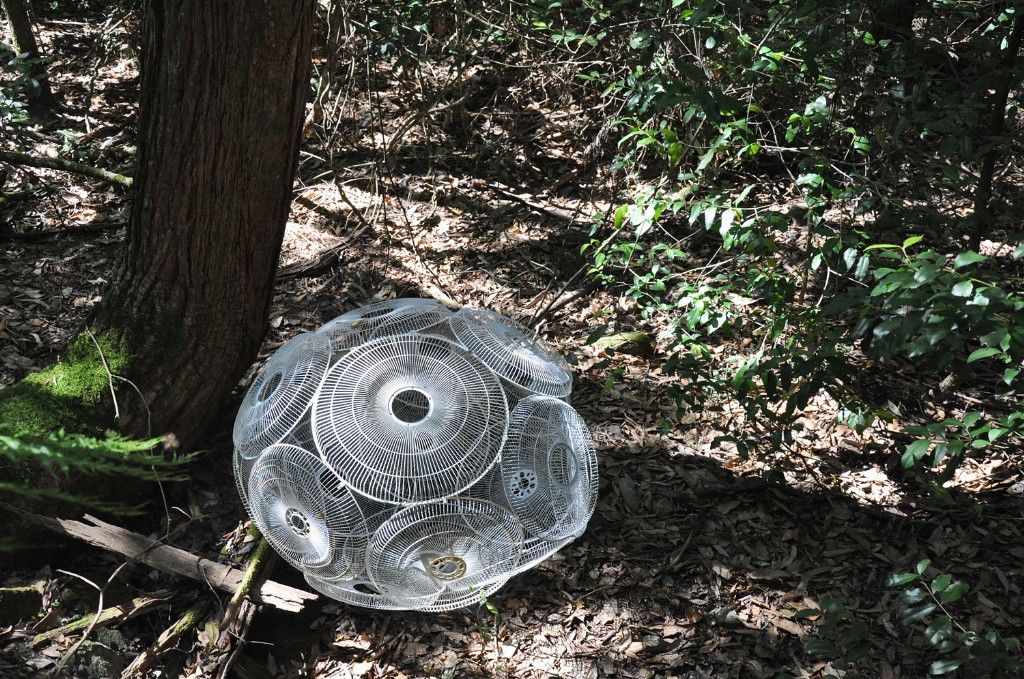 Choking Hazard – Rochelle Quantock (Victoria)
Made of plastic blocks.
Exploring issues around sustainability and landfill, Choking Hazard represents the millions of tons of plastic that are carelessly discarded every year and the devastating impact this has on the environment.