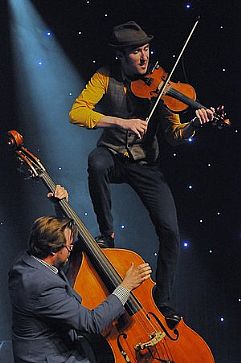 Gordie MacKeeman - Image credit Patricia Bourque
For their third Australian tour, multi award-winning Canadian bluesgrass act, Gordie MacKeeman and His Rhythm Boys are set to bring some "CrazyLegs" magic to premier folk festivals and venues across the country this March.

One of the most sought-after performers on the international roots music circuit right now, Gordie and the boys enthrall with their exceptional musicianship and exuberant, highly entertaining onstage antics - often involving the ace fiddler's renowned step dancing aptly earning him the nickname, 'Crazy Legs'.

From Glastonbury and WOMAD to Celtic Connections, Orkney and Woodford Folk Festival, this electrifying, 'Entertainer of the Year' winning four-piece continue to delight audiences at major international festivals across the globe.

Able to play 12 instruments between them, the live show is where it's at for the skilled showmen Gordie, Peter, Thomas and Jason, “We just love being onstage in front of an audience. We view our albums as a souvenir of the live show, so we record live off the floor as much as possible,” says Gordie.

The Gordie MacKeeman and The Rhythm Boys 2018 Australian Tour starts 1 March in Western Australia before hitting Victoria, New South Wales and wrapping up in Canberra at the National Folk Festival 30 March-1 April.

Tickets:
Tickets on sale now on the Gordie Mackeeman website.