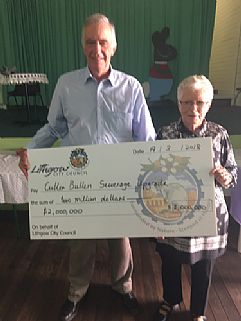 The Mayor of Lithgow, Councillor Stephen Lesslie has drawn attention to the financial contributions made by Lithgow City Council to important public projects.

“Council has been working very hard to make sure Lithgow local government area gets its fair share of government funding to enable us build new and upgraded infrastructure to improve the services and facilities for our community,” said Lithgow City Council Mayor Stephen Lesslie.

“This financial contribution by Council forms an important part of Council’s commitment to continuing the evolution of Lithgow into a modern city with top class infrastructure that is a great place to live and work and invest,” Cr Lesslie said.

“Council is appreciative of the funding that the NSW and Commonwealth governments provide to this community but the community should also be aware of the local contribution being made with your money - ratepayers’ funds.

"Lithgow Council has also applied for and would have contributed to the construction of skate parks in both Portland and Wallerawang but unfortunately we were unsuccessful in our grant application to the State Government,” concluded the Mayor.

BlueMountainsAustralia.com Advertise your business here
Announcement
Wine Tasting and a Graze Box for 2Book in to enjoy a beautiful afternoon of wine and cheese!View Megalong Creek Estate »