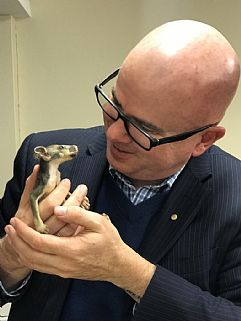 Mayor Mark Greenhill with a possum.
Council will investigate its booking processes to prevent the sale of imported exotic animal furs and skins on Council property.

At the August Council meeting, the elected Council also passed a resolution to recognise that animals are sentient beings, with subjective experiences and feelings.

The Council also reconfirmed a 28-year-old stance on banning circuses which make use of the performances of wild animals, on Council land in the Blue Mountains.

Mayor, Cr Mark Greenhill said: “Community awareness of the animal welfare issues involved in wild animal performances in circuses has increased dramatically since the 90s. The Council has reconfirmed its position on this.

“Recent media reports also highlight the cruelty to animals as a result of fur production, including animals kept in inhumane conditions and killed in inhumane ways.

“Given our community’s strong commitment to animal welfare, Council can help address this by banning the sale of imported fur and other exotic animal skins on Council owned or managed land and buildings.

“Many products are mislabelled and the trade in many exotic animal skins is marked not only by cruelty, but by its detrimental environmental impact.”

Council has also recognised that animals have intrinsic value.

“Animals deserve to be treated with dignity and respect and they should be afforded a quality of life that reflects their intrinsic value as sentient beings,” Mayor Greenhill said.

“Council has oversight over a multitude of animals.  This includes domesticated animals under the Companion Animals Act and Council ensures the welfare of domestic animals through the legislative framework.

Nature and the natural world are a critical part of the Blue Mountains Sustainability Model with the central tenet of ‘improving our quality of life and the life of the planet’ and we value all life.

Council will write to the State and Federal Governments advocating for animal sentience recognition under NSW and Australian law.

The ban does not affect the sale of Australian manufactured, ethically certified, genuine furs and leather products on Council owned or managed lands.