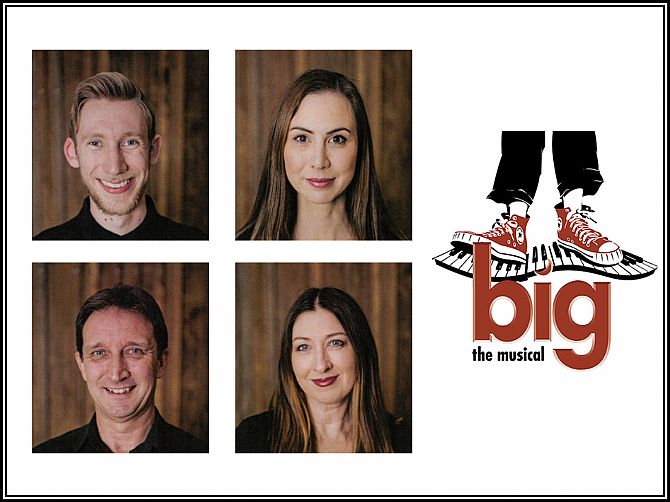 Big The Musical is based on the classic 1988 comedy ‘Big’ starring Tom Hanks. Twelve-year-old Josh Baskin becomes trapped in the body of a thirty-year-old after making a wish on Zoltar, a mysterious antique fortune teller machine. When his wish is granted, Josh suddenly finds himself having to adapt to life as an adult. Scared and alone, Josh seeks the help of his best friend Billy. He lands himself the ideal job in a toy store, evaluating new toys to determine whether or not they are fun.  However, the more he discovers the complexities of adulthood, the more he longs to be a child again.

Playing the lead role of Big Josh, Springwood’s talented Ben Roorda lights up the stage with his innocence and charm. Experienced in community theatre, Ben has performed in over fifty stage productions. Ben most recently starred as Bobby Strong in Blue Mountains Musical Society’s production of Urinetown.

Of course Josh discovers that as an adult relationships are complicated. Melanie Sestic stars as Susan Lawrence who falls for Josh’s unique charms, a refreshing change from the usual guys she has dated in the past.  As an accomplished singer, Melanie’s vocal talents are undeniable. Melanie debuted on the community theatre stage last year as the adorable Belle in Richmond Player’s production of Beauty and Beast. As the high powered executive Susan Lawrence, Melanie’s character gradually softens as she captures the hearts of the audience.

Blaxand’s Gail Waizer returns to the stage as Mrs Baskin (Josh’s mother). Gail is a professional vocal coach and recording artist specialising in Music Theatre with several albums now available on iTunes. Having performed in many musicals throughout her career, in Big The Musical, Gail shines with experience as she performs some magical numbers evoking the emotion of a mother who has lost her little boy and is longing for his return.

George MacMillian, the toy company owner, is quirkily played by Springwood’s Ben Curran. Ben has embraced a diverse range of roles over the past four years including Lumiere in Richmond’s production of Beauty and the Beast and most recently Mr Mayor in Penrith’s production of Seussical. The famous floor piano scene in the movie also features in Big The Musical which the two Bens (Curran and Roorda) play with enthusiasm and fun!

Directed by James Rye, who earlier this year starred as the mischievous Cat in The Hat in Seussical, Big The Musical is on at The Joan Sutherland Performing Arts Centre this weekend.