Images © BlueMountainsAustralia.com
Voices of Eskbank, a new publication and exhibition, will be launched on Saturday 25th November along with a series of expert talks on local architecture, historical gardens, and capturing oral histories. There will be two special performances by Mitchell Conservatorium, including a Classical Trio and an 11 piece Motown-themed band.

“Eskbank House has played a significant role in the history of the Lithgow region. Not only because of its connection with early industrialists, but also the Bracey family and past members of the Historical Society that represent the spirit, generosity and dedication of our community,” said Lithgow City Council Mayor Cr Stephen Lesslie.  “I invite all members of the community to celebrate this special anniversary, and enjoy an afternoon of entertainment in the beautiful grounds.”

Voices of Eskbank captures key moments and individuals associated with the history of Eskbank House including the influential industrialists Thomas Brown, James Rutherford, William Sandford and the Hoskins Brothers.

Eskbank House was built for Thomas and Mary Brown c.1841 – 1842 and has been at the heart of Lithgow’s industrial development ever since. Eric Bracey purchased it from Australian Iron and Steel in 1948, and with the Lithgow District Historical Society, opened it as museum on 21 November 1966.

This exhibition was made possible with the support of a Heritage Near Me Grant from the New South Wales Government.

Bookings:
There will be free entry to the museum and talks on 25 November. To attend RSVP to summar.hipworth@lithgow.nsw.gov.au

Voices of Eskbank will continue to be on exhibition until 28 January 2018. 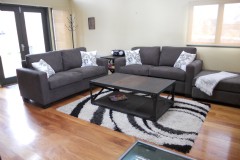