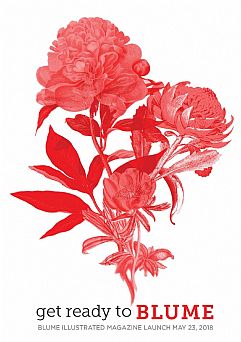 The second issue of Blume Illustrated, an annual independent arts-focused magazine based in the Blue Mountains, launches on 23 May this year – and it promises to be an unmissable event!

“We’re fortunate enough to have iconic Australian illustrator and artist Michael Fitzjames as our special guest speaker at the launch, so the night is set to be a celebration of creativity in print,” says Faye Wilson, Creative Director of Blume Illustrated and founder of the Blume Project.

“Issue two of Blume Illustrated once again harnesses the mighty talents of the Blue Mountains’ many world-class illustrators, writers, designers and thinkers in a beautifully presented, free full-colour publication. The launch is the culmination of months of hard work, so we’re inviting everybody to come and celebrate with us and meet their favourite creatives!”

The second edition is dedicated to Katoomba poet Deb Westbury who died in April this year after a long illness. Two of her Katoomba poems are featured along with new, original work by celebrated Australian artists, poets and writers such as James Gordon, Jude Martinez, Ward O’Neill, Tohby Riddle, Michelle Streich and Wilson herself. It also introduces some new up-and-coming creatives including unpublished aspiring illustrator, 17-year-old Tessa Bunton who was mentored by Faye to create three illustrations for the magazine. The work featured in the magazine will form part of the next Blume Illustration Festival, scheduled for August 2020. The main exhibition for this festival is titled Black & Blue 2 and will be held at BMCC Gallery in Katoomba. Black & Blue, The Book will also launch during this festival. The first Black & Blue (Black Stories from the Blue Mountains) exhibition was held at the BMCC Gallery in 2014.

The first edition of Blume Illustrated was published in March 2017. Its release coincided with the inaugural biannual Blume Illustration Festival, held in Katoomba during the month of May 2017. The first issue and festival focused on topics as diverse as the role of satire and political cartooning in a modern-day context, the life of a freelance creative and how the Rime of the Ancient Mariner inspired an entire collection of work.

“The Blume vision includes creating a world-class publication that best showcases the unique spirit of the Blue Mountains and establishes it as a cultural destination – but is also still relevant and recognizably valuable in any part of the world. Blume Illustrated Magazine is only one part of the picture – exciting plans are in the works, and the Blume project is only set to grow in the future.”