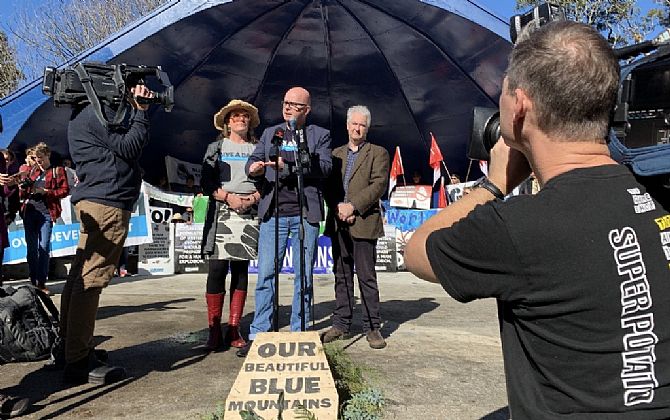 Mayor Greenhill addressed a crowd of nearly 1000 at the ‘Give a Dam’ rally in Katoomba on 9 June and said the destructive proposal to raise Warragamba Dam wall had to be stopped. The Mayor is pictured with Member for Blue Mountains Trish Doyle and Shadow Minister for Climate Change Adam Searle.
Blue Mountains City Mayor Mark Greenhill said he was incredibly concerned about a leaked report that revealed raising Warragamba Dam wall would result in a permanent impact on the World Heritage Area.

Up to 1300 hectares of World Heritage listed Blue Mountains bushland could be permanently damaged by floodwaters if the Warragamba Dam is raised, a draft environmental impact statement from September 2018 revealed, according to the report published by Fairfax media yesterday.

“We need to protect and conserve the World Heritage values of the Blue Mountains,” Cr Greenhill said.  “We oppose the raising of Warragamba Dam wall. Too much is at stake.”

It has been reported that a 14-metre increase to the dam would result in an “overall high direct (physical) impact” to the Blue Mountains, including a number of Aboriginal cultural sites. The bushland lying within the proposed temporary inundation area would also be “permanently” affected in the event of a significant flood.

Give a Dam community group manager Harry Burkitt accused the State Government of underplaying the impacts of the plan.

“The world heritage area impacted is more than 4.5 times Sydney’s CBD – more than double what Minister Ayres has admitted to Parliament and the public.”

“This report shows that the NSW government has known all along that raising Warragamba Dam would have significant impacts on the iconic Blue Mountains World Heritage Area, yet they have chosen to hide it from the public and UNESCO." 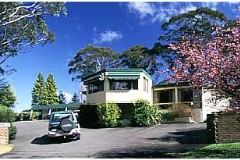 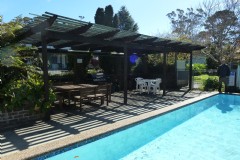