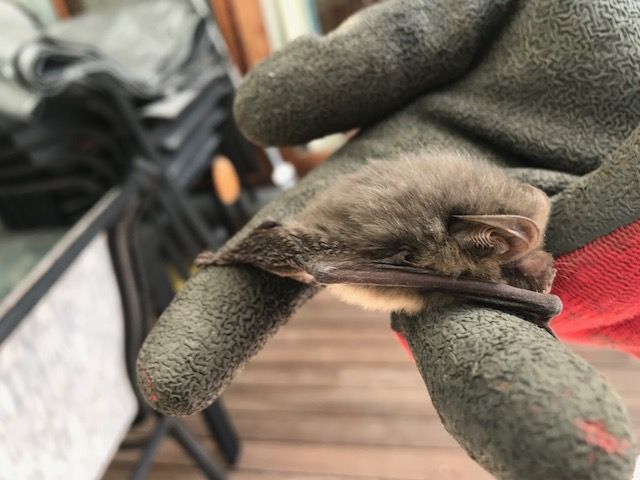 Lesser Long Eared Mirco Bat (image credit Sarah)
Imagine you’re cleaning out your gutters and you find a micro bat amongst the leaf litter. Local Blue Mountains resident William Lewis did just that and made sure to log his find with the Blue Mountains Fauna Project.

Mayor, Cr Mark Greenhill said: “We want members of the Blue Mountains community to observe and share their knowledge of local wildlife. The aim of the Fauna Project is to better understand what animal species are found in our bushland reserves, towns and villages.”

Reports and sightings can be historic or recent, as all recordings will help add to what we know about where animals live and what animals have disappeared, or are moving into the area.

Cr Greenhill said: “We want residents to get involved and record all those times we hear someone say they have seen a “bluey” in the park or a Tiger Snake on the road, or a Superb Lyrebird in the local reserve.

“It will help build a much clearer and more balanced picture of what animals are living where. This will allow for better management of animals in our local bushland reserves.”

There are over 6,500 hectares of bushland reserves around our towns and villages and the reserves could be home to over 300 species of vertebrate fauna (animals with backbones).

Community knowledge is critical because databases such as the NSW BioNet Atlas, that collects information on fauna, are often collecting records from consultants or scientists studying a specific species.

We are looking for records on all animals and not just the threatened species, which is often what scientists are interested in and collect data on; for example the Blue Mountains Water Skink which has more records than Lace Monitor, Red Bellied Black Snake, Eastern Blue Tongue and Highland Copperhead combined.

This project will run until June 2019 when the final report and species maps will be available through Council.

Council’s Blue Mountains Bushcare will be running a series of community walks and talks, surveys and spotlights during Spring. Details can be found on the Bush Care Blue Mountains website.

If you would like to submit a record or to find out more, go to Council’s Have Your Say site.

Annie's Cottage is fully self contained and private.