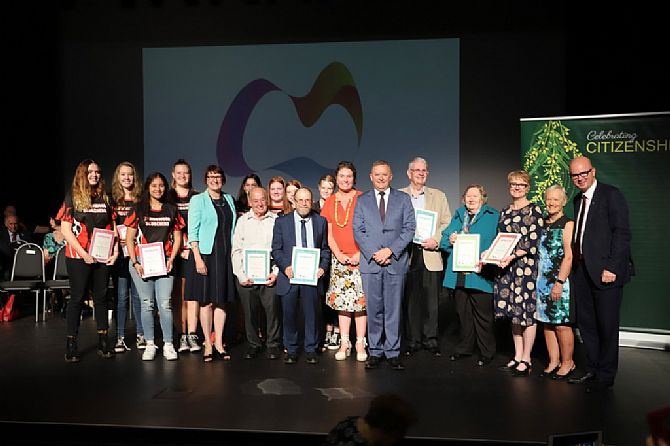 Award recipients for 2020, announced at the ceremony, include:

Mr Albanese, who announced the Community Achievement of the Year Award, said: “The performance of emergency services including NSW Rural Fire Service, Fire and Rescue NSW and NSW National Parks and Wild Life Service, NSW Police and others in guiding the recent response to the bush fires, was simply extraordinary.

“The leadership and on the ground fire-fighting that protected the City of Blue Mountains is widely recognised as having saved the vast majority of the towns and villages of the Mountains from the impact of the unprecedented bush fires. Today we acknowledge these efforts of our emergency services and thank them, from a grateful community.”

Members of the Blue Mountains City Band also performed at the event.

Madeleine is an exceptional educator who has worked at Winmalee High School for over 20 years, teaching Drama. She is an enthusiastic, committed and empathetic teacher who has enriched the lives of many. Madeleine works with students to develop not only their dramatic skills, but their understanding of the world they live in, finding their place in the world, and how to work effectively with others while being passionate and having a cause to fight for.

This can been seen in her consistent work with students in and out of the classroom. She is known for her excellent musical productions and drama showcases, most notably her work on an original piece “Straw hats, thongs and toothbrushes” reflecting on the impact of the 2013 bush fires. The development of this piece was instrumental in the healing process for many of the Winmalee and Yellow Rock citizens impacted, many of whom were families of Winmalee High. Madeleine has also set up strong links with local primary schools, working alongside teachers and students to develop and encourage an understanding and love of the performing arts from a young age.

Senior Citizen of the Year (65 years+)

John has been a resident of the Blue Mountains for 30 years and has been a member of the Rotary Club of Lower Blue Mountains since 1988. John established the Glenbrook Food Markets (now the Glenbrook Make and Bake Markets) and was the coordinator for the large event every third Saturday of the month market for 10 years. He was the chair of the Blue Mountains/Nepean Special Olympics Committee for five years and was an advisor to the state organisation in the field of child safety, a passion of his. He instigated the first Child Protection Policy for Rotary in Australia and encouraged the rest of the Rotary world to take child protection seriously. He is currently the Child Protection Officer for all of Australia and New Zealand. Through his dedication and perseverance, John was able to pull together the first ever Blue Mountains Police Officer of the Year awards, and was the inaugural chairman of the event. John was also a hard working member of the Crossings Committee that celebrated the bicentenary of the crossing of the Blue Mountains. For many years John was the deputy chair of the Rotary Club of Lower Blue Mountains Australia Day Committee. In his Rotary career he has been involved in the successful Rotary Youth Exchange Program. John was also a member of the NSW Police Force and retired in 2000 after a distinguished 40 year career.

Coralie was born in Leura and educated in the Blue Mountains. She trained in education at Sydney Teachers college, East Sydney Tech, Sydney University and TAFE, and has taught in a number of schools. She has also been a Federation Representative for the NSW Teacher’s Federation, run personal development classes and taken and organised huge skiing tours. Coralie’s honesty, integrity and willingness to help has led her to volunteer her time across a wide range of community activities. These include (but are certainly not limited to) her work with the Salvation Army, the Church, the Sydney 2000 Olympics, and the Royal Easter Show. She is also always there to help her friends and neighbours and sits on the Board of Directors for the Blue Mountains Aboriginal Culture and Resource Centre (ACRC).

Coralie is an immensely experienced teacher, with a masterful grasp of the curriculum and a passion for her subject and teaching young people. She always has enormous energy and commitment and an unrivalled drive to achieve outcomes. She is also a long-time advocate for voluntary assisted dying laws and suicide awareness and prevention. Her engaging and friendly personality, generosity and dedication to helping people in significant ways means Coralie gives herself to each cause in the most energetic and purposeful way. She continues to make significant contributions to the Blue Mountains and wider communities, and celebrating her home by writing and publishing her own book, ‘Blue Mountains the City within a Park’.

Greg has been Blue Mountains resident for almost 40 years and has been a major advocate for Multiple Sclerosis, raising awareness and over $26,000 towards the cause. Several years ago, Greg was driven to action after seeing friends suffer from this debilitating disease and decided he would walk from Springwood to Cairns to raise money and awareness. For the next few years, Greg became quite the local legend on his very long training treks all around the Blue Mountains. During his 2,654km walk to Cairns, Greg encountered hardships that would have discouraged even the bravest of souls, yet he persisted through all of them including foot and knee injuries, mechanical issues with his cart, steep terrain, harsh weather and rough sleeping conditions. Perhaps the most amazing aspect of Greg's incredible journey was the fact he physically dragged all his provisions with him on a cart, with a total weight that exceeded his own. Throughout his epic three month journey, Greg had a strong social media following which included many Blue Mountains residents following his almost daily updates on Facebook. Through persistence and utter determination Greg achieved an extraordinary goal. And he did it with the utmost humility - never seeking any recognition or praise. The folks of the Blue Mountains are very proud of Greg's achievements.

Environmental Citizen of the Year (any age)

Margaret has been a tireless, committed and passionate advocate for protecting the Blue Mountains environment for over four decades. Giving her time as both a professional and a volunteer, Margaret has shown outstanding commitment to and excellence in education, life-long learning and the promotion of the natural environment. Margaret has contributed to the environmental education of people in the Blue Mountains, authoring numerous submissions regarding planning and development proposals and initiating and developing the highly regarded ‘Native Plant Identification’ course for TAFE to provide formal training in the botany of the Sydney and Blue Mountains flora; which at the time was the only such course available in NSW. She has used her expertise to provide depth, understanding and balance between the many competing forces in the community and co-authored and published books on the native flora and fauna of the Sydney Region and the Blue Mountains, providing access to high quality reference books and field guides for locals and visitors. She has also devoted her time to voluntarily survey and document ecological communities across the Blue Mountains and developed a scientifically rigorous recording system that allows for the collection and submission of the data required by organisations such as the Office of Environment and Heritage for BioNet, its repository for biodiversity. Margaret formed and leads the BMBR Ecological Surveys citizen science group. The data collected by this group aims to expand and verify existing knowledge of plant communities, especially rare and endangered species, and documents findings to help protect the natural environment. She also regularly assists local Bushcare groups on a voluntary basis with native plant and weed identification. She works cooperatively and shares knowledge with stakeholders including Blue Mountains City Council, the Blue Mountains Conservation Society, NSW National Parks and Wildlife Service and TAFE, and works closely with professionals at the Royal Botanic Gardens in Sydney providing specimens.

Community Achievement of the Year

For our 2020 Community Achievement of the Year Award we recognise and say ‘thank you’ to our emergency services for their incredible leadership and contribution in responding to the Blue Mountains bush fires 2019/2020. 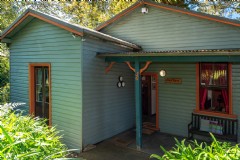 Closure Of Echo Point and New Travel Restrictions Due to COVID-19
Echo Point will be temporarily closed to the public from midday tomorrow...
More News » 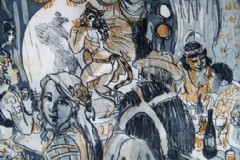