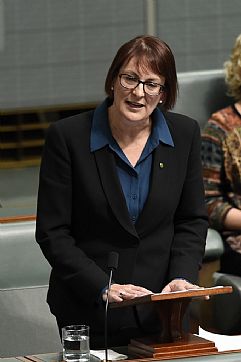 “This Government are cutting the energy supplement which will cost pensioners $14 a fortnight, they are cutting $17 billion from schools, and an extra $270 million is being cut from TAFE.

“There’s also $84 million taken from the ABC, $2.2 billion from universities and more than $140 million from foreign aid over the next four years.

“These cuts aren’t being made to reduce the national debt, or to increasing funding of the NDIS or our education system, these cuts have been made to fund the Government’s $80 billion tax handout to big business,” Ms Templeman said.

“To put it simply, the majority of Australian’s lose in this budget, because big business and the banks win.”

The Government announced on budget night that they will be funding 14,000 new in-home aged care packages over the next four years, but Ms Templeman has said this announcement was made without a single cent of new money for aged care.

It was also announced that savings from the ABC cuts will be redirected to other spending measures within the communications and arts portfolio, according to the budget papers, including $48.7m for the commemoration of the 250th anniversary of James Cook’s landing in Botany Bay.

“And anyone who hoped that the mobile black spot program would help address the multiple mobile phone black spots that we have across the Hawkesbury and Blue Mountains will be disappointed to know the program has effectively been canned.

“In fact as awful as the funding cuts to foreign aid are, the absence of any mention of climate change or renewables is equally frightening.”